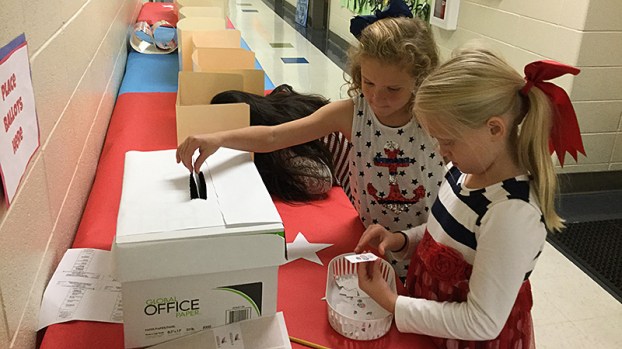 ALABASTER – Third-graders at Alabaster’s Creek View Elementary School cast ballots in the presidential election on Nov. 8, and supported the same candidate as their adult counterparts while learning about the electoral process.

Throughout the day, all students at the school were invited to cast votes for either Hillary Clinton, Gary Johnson, Jill Stein or Donald Trump, mirroring the actual presidential ballot.

The mock election highlighted the social studies lessons the students have been learning over the past semester, and was organized by the school’s third graders.

The polls were open from 8 a.m.-2 p.m., and a steady stream of students visited the polls, which were set up in the school’s hallways, throughout the day.

The importance of voting wasn’t lost on the hundreds of students who participated.

“When you vote you can help make history, and the right person will become president,” third-grader Faith Hall said after casting her ballot.

“Voting is important to me because it will make it fair and it is the decision of a lot of people, not just one,” Simmons said.

After voting in the school’s election, several students said they are planning to register to vote in actual elections when they are old enough.

“Voting is important, because we need lots of people to vote to help determine who is president,” said third-grader Ana Katkin.