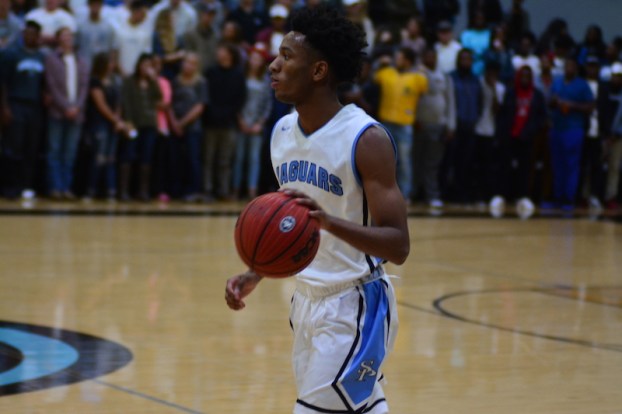 Basketball season is now officially in full swing after almost every team in the county started their season on or before Nov. 15. (Reporter photo/Stephen Dawkins)

The Jags traveled to the Von Braun center on Huntsville on Monday, Nov. 14 to take on Lee-Huntsville in a four team doubleheader that featured some of the top basketball talent from across the state of Alabama, including recent Alabama commit John Petty of Mae Jemison. Spain Park had their own star show out in the double header as Memphis commit Jamal Johnson scored 31 points to lead the Jaguars to a 59-52 win. Spain Park has been one of the busiest teams early in the year having already played three games and jumping out to a 2-1 start.

Will Stephenson’s six three’s and 20 points led Oak Mountain to a 63-34 win over Stanhope Elmore in their first game of the 2016-17 season. Stephenson also added five assists to his scoring line. Senior guard/forward Noah Egan added 12 points on four three pointers, while sophomore Chris Mayweather had eight rebounds to go along with seven points. It was a great start for the Eagles, who are looking to get redemption for last season’s tough Elite Eight loss.

The Calera boys’ basketball team fell on the road to Childersburg 70-54 to start their season. After falling behind 48-23 in the third quarter they wern’t able to recover. The Eagles are now 0-1 on the season young season, but have plenty of time to right the ship.

Returning leader Stephen Campbell had 21 points for the Yellow Jackets as they almost doubled up the Knights in a 68-36 route at Samford. In an impressive stat line, Campbell also added 8 rebounds, 5 assists and 6 steals on the night. Chris Hardie added an additional 16 points as he and Campbell combined for 37 of Vincent’s 68 points. The Yellow Jackets are a young team and a 1-0 start will definitely help them gain some confidence, something that head coach John Hadder will use to his advantage. Parker Mixon led the way for the Knights with 12 points, while Weston Padgett added 8 points and Wiley Boone added 7 points and 5 rebounds.