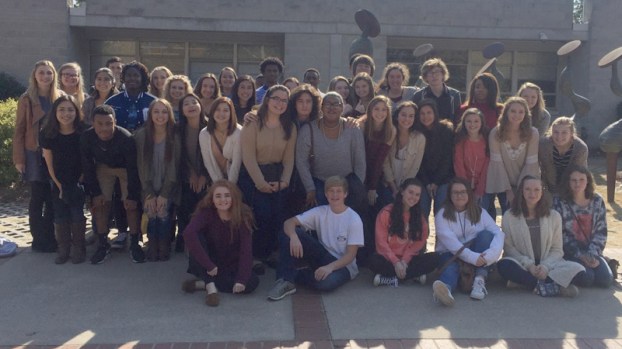 CHHS French students at an Eric Vincent concert. The students took a field trip to the Altamont School for the concert as part of National French Week. (Contributed)

“In the classroom, we took a week to emphasize culture instead of just grammar and the written word,” Montgomery said. “Every day, we place an emphasis on learning and speaking the language, but this week gives a purpose to why we study it. We want to learn about another culture.”

During the week, Montgomery’s students used the Family and Consumer Sciences classroom to make Crepes, held a poster contest, listened to guest speaker and French native Silvana Cureton and attended a concert by French singer Eric Vincent at the Altamont School in Birmingham.

Montgomery said that National French Week also served to revitalize her students’ interest in learning about the French language and culture.

“It gets monotonous, just studying grammar and conjugating verbs. I’ve seen a difference. The students’ interest seems to be revived this week. They want to do well, and they’re working hard.”

Through National French Week, French Club members also raised funds for Hope for Haiti by collecting loose change from students and faculty. According to Montgomery, the CHHS French Club has partnered with Hope for Haiti for several years.

“It’s a really good opportunity for the kids, especially. They, and their parents, can try things that you typically don’t find in your typical Mexican restaurant. These are more authentic. It’s just a good time for everybody to get together and see what the other classes are doing and to broaden their horizons a little bit,” Kortright said.