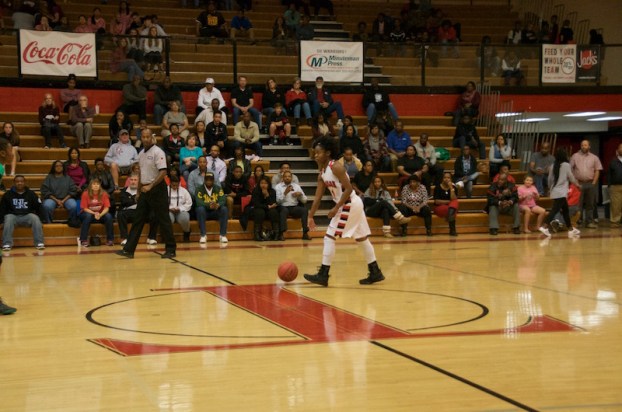 Thompson’s Kahyanne Bolton dribbles the ballup the quart in the second half of the Warriors opening night loss. Bolton had 18 points in the half. (Reporter photo/Alec Etheredge)

Although the girls went on to lose to John Carroll 72-66, there was a lot Ward had to be pleased with.

The Lady Warriors went into the half trailing 33-28 mainly because junior point guard Kahyanne Bolton picked up three early fouls that limited her minutes and held her to just two first half points. Senior guard Lauren Black picked up the slack by knocking down three first half three pointers.

Thompson came out of the locker room like a team on a mission and looked rejuvenated. Bolton and Black helped start the third quarter on a 15-4 run, which gave them a 43-37 lead. Black had five and Bolton had eight as they combined for 13 of the Lady Warriors’ 15 points in the quarter.

Things were going well until Bolton picked up her fourth foul and headed back to the bench. John Carroll took advantage and went on a 12-2 run to end the quarter and snatch the lead right back at 49-45.

Not much changed as the Cavaliers came out and went on another 10-2 run, which gave them a 22-4 run dating back to the third quarter. They took a 59-47 lead before Bolton and Black tried to spark a comeback. Thompson eventually cut the lead, but wouldn’t get closer than the final of 72-66.

Bolton led the way for the Warriors with 20 points, 18 of which came in the second half. Black added another 19 points after draining five three’s in the game. Josi Wannameuler had a game high 30 points for John Carroll.

I’m sure it wasn’t the outcome Ward or her team wanted in the first game, but there were several promising things they could take away from game one.