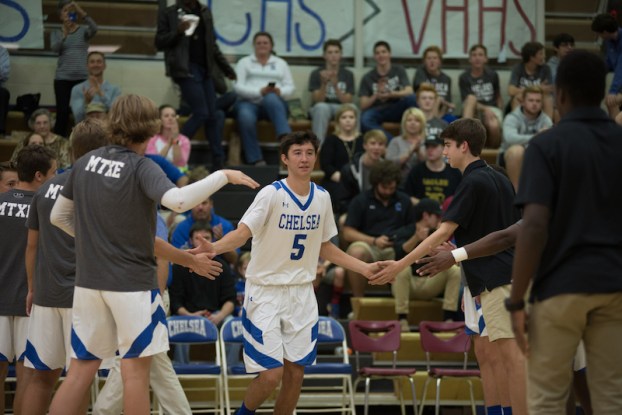 After a slow start in their first game of the season, Joseph Lanzi bounced back to lead Chelsea with 28 points in a game two win against Gardendale. (Reporter photo/Keith McCoy)

Coming into the season Chelsea head coach Nick Baumbaugh preached that defense would be the key. He wanted his team to be scrappy and physical, so much so that after their 56-52 win over Vestavia on Nov. 10, he was disappointed his squad had given up more than 50 points. Well he had to be pleased that his team only gave up 49 points in regulation during this game and didn’t allow a single point in overtime.

In the first quarter Josh Hanna opened the scoring with two quick baskets, which propelled Chelsea out to an early 4 – 0.  They wouldn’t give up the lead in the quarter and held a 14-12 lead at the end of one.

Lanzi and Colby Lambert both hit three’s in the second quarter to help extend the Hornets lead to three at 28-25 going into halftime. Lanzi had a balanced attack on the night chipping in 14 of his 28 points in the first half.

Chelsea held the lead the majority of the game including the third quarter, but in the fourth, Gardendale went up 42-41 with four minutes left in the contest.

In a back and forth game the rest of the way, Gardendale’s Jay Brooks grabbed an offensive board off of his own miss and tipped the ball back in as the buzzer sounded to send the game to overtime.

In overtime, much to the pleasure of Baumbaugh, the Chelsea defense dominated and did not allow Gardendale to score. Lanzi, however, would not be held scoreless, the senior was able to make a layup and then hit two free throws with 12 seconds left to ice the game with all four points in overtime.

Lanzi finished the game with 28 points hitting four three pointers and all four of his free throws. He also added four rebounds, two steals and two assists on the night. Matthew Marquet and Josh Hanna both finished with 8 points.

No Reese, no problem for Pelham

FROM STAFF REPORTS PINSON VALLEY – The Pelham Panthers opened the 2016-17 season with a 69-59 win at Pinson Valley on... read more