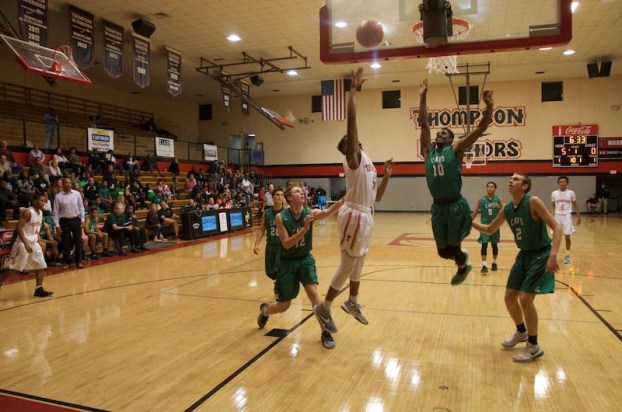 Warriors senior Nehemiah Womack lays the ball in just out of the reach of a John Carroll defende. (Reporter photo/Alec Etheredge)

ALABASTER – The Thompson Warriors basketball team had three score in double figures as they went on to take down John Carroll in a thrilling last-second 54-53 win on Tuesday, Nov. 15. The game marked head coach Kelly Cheatham’s first game leading Thompson after coming from Ramsey where he had tremendous success.

Cheatham said before the season a scrappy physical defense would be the key to this team especially early on. The first quarter started out exactly as expected. Thompson came out in a full court press and hounded the Cavaliers forcing bad shots and turnovers as the Warriors jumped out to a quick 7-0 lead.

Thompson ended up missing several shots the rest of the quarter, which allowed John Carroll to claw their way back into it as they only trailed 16-13 after the first quarter.

The Cavaliers switched to a 2-3 zone defense in the second quarter, which really seemed to bother the Warriors. It slowed the pace of the game down and Thompson wasn’t able to hit any deep jump shots to take advantage. The Warriors still managed to take a 25-20 lead into halftime.

John Carroll started the second half on a 5-0 run to tie things up. On the defensive end not only were they still in the 2-3 zone, but they started pressing Thompson as well, which gave the Warriors fits. Any time they were able to get out on a fast break they would score, but whenever the Cavaliers made a basket and were able to set up their defense Thompson struggled mightily.

At the end of the third the Thompson lead had dwindled down to just one at 38-37.

In the fourth the two teams battled back and forth as the Warriors finally started penetrating the zone and making open three’s. With 3:20 left to play the two were tied at 48 before sophomore Jalen Bustamante got a crucial basket and then turned up the defensive pressure forcing a turnover, which led to another basket. Up 52-48 with less than three minutes to play, the Warriors gave up a quick 5-0 run and were all of a sudden down 53-52 with 42.4 seconds left to play.

With time running down Thompson senior Drew Thomas was able to penetrate the lane and when everybody converged on him he dished the ball to Jaylin Wilson who laid it in with 5 seconds remaining. John Carroll would miss a heave at the buzzer as the Warriors held on to win 54-53.

Bustamante led the way with 16 points, while Thomas added 13 and senior Nehemiah Womack added 11 in the Warriors’ balanced scoring attack. Thompson is now 1-0 under Cheatham and will travel to Oak Mountain for a tough test on Friday, Nov. 18.