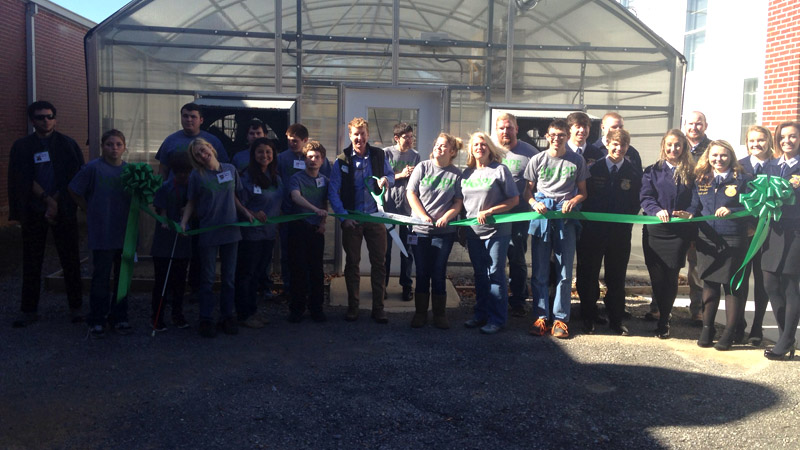 Shelby County High School held a ribbon cutting ceremony for a greenhouse on campus. The greenhouse was build as part of an initiative by a program known as Herbs Offering Personal Enrichment (HOPE), which gives schools the opportunity to include gardening into their curriculums.

“One of the things that we’ve recently discovered is that we need a greenhouse to keep the program going year round,” Shelby County Schools Public Relations Supervisor Cindy Warner said. “The purpose of the ribbon cutting ceremony was also about sharing information about the project with community members and to celebrate what it has done for our students.”

According to Warner, the program originally started as a partnership between the Shelby County School system and Taziki’s Mediterranian Cafes, which has seven locations in Birmingham.

“The owner said that he would love to hire more students with special needs at his restaurants. We were trying to figure out a way to directly, or indirectly, hire more,” Vinson said.

Vincent High School in 2012 and since has spread to other schools around the county. While the program was instated at SCHS around two years ago, SCHS Special Education teacher Dustin Cleckler said that it didn’t gain much traction among the students until this past summer.

“It really gets the point across that what you learn about in science and math can be put into a hands-on project,” Cleckler said.

The students who are involved receive a paycheck and skills that are applicable to jobs in the agricultural field and real life. A portion of the profits also benefits the SCHS agricultural science program.

Students currently grow basil, oregano, parsley, cilantro and rosemary, and are looking to grow other herbs per requests from local businesses. Herbs that are grown in the garden have been sold to the seven locations of Taziki’s and to the Piggly Wiggly in Columbiana. HOPE at SCHS is planning on expanding their business to other businesses in the near future.

“We have flourished from growing a pound or two to 17 pounds. It’s been overwhelming at times,” Vinson said. “As long as there are businesses that will buy our products, this will constantly flourish.”