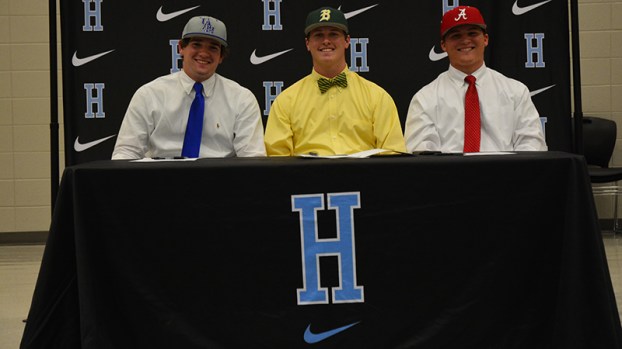 HELENA–Three members of the Helena High School baseball team celebrated on Monday, Nov. 14, as all three young men were surrounded by family and friends to sign athletic scholarships to three separate college institutions.

Seniors Sam Praytor, Troy Cordrey and Brooks Brophy will all continue their academic and athletic careers at the collegiate level after graduating from HHS in 2017.

Helena head baseball coach PJ Guy took over the program in 2015 in the Huskies first year being a school and said a few words about each player at the signing ceremony held in the HHS cafeteria.

“I’m very lucky and blessed to be a small part in their lives the last three years,” Guy said. “The Lord blessed me to come to Helena and just have the opportunity to coach these three wonderful young men. Being a head coach, I look at the bigger things in life and I’m just more proud and thankful that all three men are going to get their education and I think it’s the most important thing. Obviously all three will get to play the game they truly love.”

Guy praised Praytor for his work ethic and how much he works to perfect his game. He also complimented Cordrey on being a fierce competitor and Brophy’s confidence he shows on the field each day.

The remainder of the ceremony included each player giving thanks to all the special people in their lives, coaches and parents speaking about the players, followed by a reception with food and refreshments.

Praytor, Cordrey and Brophy will look to be leaders on the team in 2017 as the Huskies move up to play in the 6A classification.