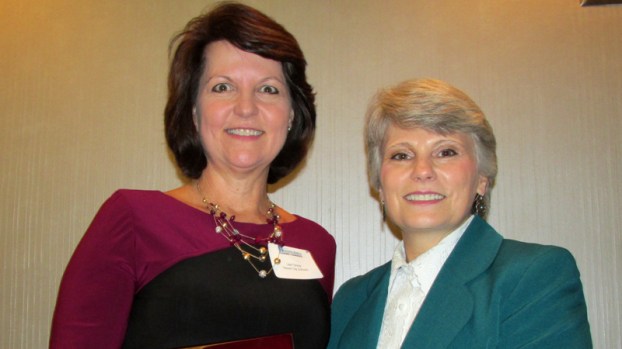 By MICHAEL J. BROOKS/For the Reporter

HOOVER – Hoover Superintendent of Education, Dr. Kathy L. Murphy, gave a state of affairs report to the Hoover Area Chamber of Commerce luncheon on Nov. 17, and the report was a good one.

“We’re accountable to the federal and state governments,” Murphy said, “but our largest accountability is to you—the parents and the taxpayers. And we take this accountability very seriously.”

Murphy said the “No Child Left Behind” plan is still in force, but it’s giving way to the “Every Child Succeeds” plan signed by the president on Dec. 10, 2015. The state of Alabama has also adopted “Plan 2020” furthering accountability to Alabamians.

Murphy said the ACT test is given to all 11th graders in 16 U.S. states, including Alabama, and the Hoover system also administers the ACT Aspire test to grades three through eight and 10.

Murphy said Hoover was doing good work also with the at-risk/special education students who had similar high scores, and that the system had committed teachers working with this group.

Turning to graduation numbers, Murphy said the board’s goal is to “put everyone in cap and gown” and award diplomas. For 2015, Hoover had a 93.1 percent graduation rate that was one-half percentage point above the previous year.

“We’re not content with the other 7 percent,” she said, “but some of them are taking another year to finish their degree and some, unfortunately, drop out or leave without withdrawing.”

As to their after-graduation plans, Murphy said 84 percent of seniors attend one of the three schools they indicated interest in on the ACT and 46 percent of seniors were awarded scholarships totaling $60.5 million. Eighty-nine percent said they planned to attend a two- or four-year college and 4 percent planned to join the military.

“We believe vocational schools are a good option for many of our students,” Murphy said, “and this is something we’ll emphasize more in the future.”

Murphy said the system is making progress on safety and security and on fiscal matters, too.

“We’re pre-paying our 2010 bond and refinancing the 2005 bond, saving millions of dollars,” she said. “We’ve worked on salaries, utilities and capital outlays to save money. We ended the year with half a million (dollars) to the good.”

Murphy concluded her remarks by introducing the three finalists for the Chamber’s 2015-2016 “Hoover City Schools Employee of the Year.”

Students from Elvin Hill and Calera Elementary schools discussed what they were grateful for during the Thanksgiving season. Several students... read more