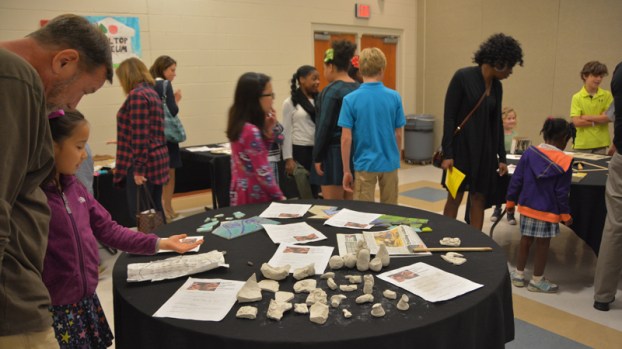 A museum was created to house the artifacts created by students at a program that served as the culmination of the project. (REPORTER PHOTOS/STEPHEN DAWKINS)

NORTH SHELBY – Students at Hilltop Montessori School learned first-hand what it is like to be an archaeologist and presented their findings to family and friends.

The culmination of the Digscovery project, which was facilitated by Phi Theta Kappa and Jefferson State Community College, was an event on Nov. 9 at the college.

Liesl Harris, associate dean of transfer and general studies at Jeff State, welcomed those in attendance before Lisabeth Barton discussed the creation of the project, Cameron Kent explained Digscovery and Georgette Scott introduced the schools.

“I think you could tell from some of the reactions that we had fun,” Harris said about a slideshow played at the beginning of the event that included photographs from different parts of the project. 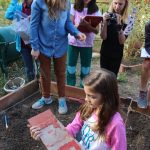 Hilltop Montessori School students unearth and make notes about an artifact they found as part of the Digscovery project facilitated by Jefferson State Community College and Phi Theta Kappa.

“I couldn’t imagine a better group of students to work with for this project,” said Kent, a Phi Theta Kappa student at Jeff State.

Digscovery began with students from Hilltop and Birmingham’s Cornerstone Christian School visiting the Birmingham Museum of Art on Sept. 23 to view various artifacts from cultures around the world.

Then, students from each school created a culture of their own, even building artifacts from materials provided by the facilitators.

The artifacts were buried at the opposite school’s campus, and a “dig day” was held, when students unearthed the artifacts.

Students then attempted to make determinations about the other culture based on the artifacts they found.

Hilltop students took turns behind the microphone at the finale describing the artifacts they found, including measurements, location within the dig site, the depth at which the artifacts were buried and an analysis of what each artifact could have been used for.

Hilltop students Cleo Moore and Hazel Jackson gave their thoughts on the teamwork required for the project.

“Sometimes it can be tough, but it’s fun,” Moore said, and Jackson added, “If you work together, you can get stuff done.”

After the program, those in attendance were invited to browse a “museum” that had been created to house the artifacts and treated to refreshments.