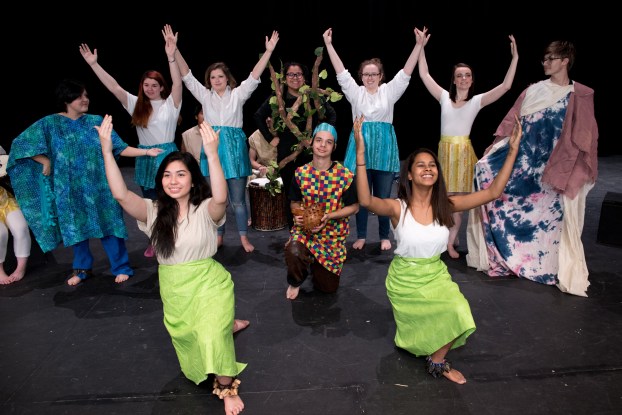 “Rain” features rhythmic drumming, dancing and the telling of folk talks from Nigeria’s Yoruba tribe. Theater teacher Jamie Stephenson said the storyline of the production is centered on the Yoruba values of showing respect to elders, honoring ancestors and working for the village – not just for one’s self.

“They’re all good values to reinforce,” Stephenson said. “This African culture is beautiful and it’s something that we can all learn from.”

“We’ve become very insular and we forget that there’s a whole world outside of Pelham, Ala.,” she said.

Mama Yeye was able to visit the school thanks to a $20,000 Alabama Arts Education Initiative Grant. The school was able to pay for Mama Yeye’s visit, purchase drums and a sewing machine to make costumes.

Stephenson said 25 students are participating in the production. The students performed “Rain” during a competition at the Alabama Conference of Theatre’s Walter Trumbauer Theatre Festival on Nov. 6, and was named best in show and best ensemble.

The students will go on to perform “Rain” at a state competition Dec. 1-3 at the University of North Alabama.

Eleventh grade student Lucas Schlosser, who is a drummer and plays the role of a negligent youth, said this experience has been the most fun he’s had in theater so far.

Tenth grader Ramsey Thrash, who is a drummer and plays the role of a cook in the play, said the folk tales in the production made more sense after learning about the Yoruba tribe and their beliefs from Mama Yeye.

Senior Vidal Solito, a drummer in the play, said the production is all about uniting and leaning to have respect for each other.

“That’s the way it should be,” Solito said. “The community vibe is missing in our society. Now we tend to focus too much on ourselves.”

Dessert and Drama costs $10 to attend and will be held in Pelham High School’s auditorium. The event will feature a dessert buffet, complete with a chocolate fountain, and various theater performances throughout the evening.