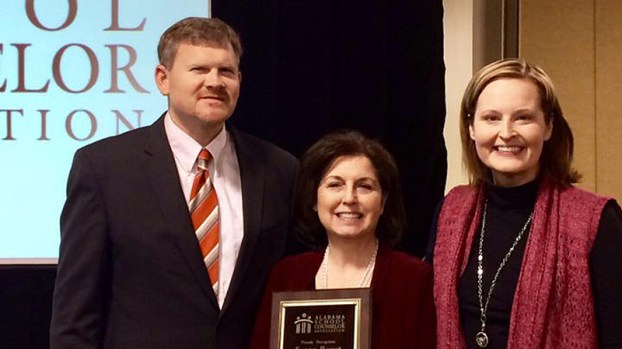 ALABASTER – Thompson Sixth Grade Center counselor Susan Beard earned time in the spotlight at a recent Alabama School Counselors Association meeting, as she was named the organization’s 2016 Middle School Counselor of the Year.

“Ms. Beard is an amazing school counselor, and we are so excited that she received this honor,” Tanner said.

Beard has been serving as counselor at TSGC since 2011, has been a school counselor for 12 years and has 24 years of experience as an educator. While this year marks her first statewide counseling award, she previously was named Counselor of the Year by Alabaster City Schools in 2015 and by the Shelby County School System in 2008 and 2009.

She holds a bachelor’s degree in English from the University of New Orleans, and has taught at a middle school in Louisiana and a high school in Georgia, where she “discovered her passion for counseling from helping one young man reach his goal of graduating, when he never believed he would,” according to the School Counselor Association.

“The same week he graduated, Susan enrolled in the master’s program, earning a master of education in counseling and guidance from Augusta State University in 1998,” read her biography read at the association’s meeting. “She has been happy in Alabama since 1999, and wakes up every day excited to head to school. She believes there is nothing more important than children, and each one needs to feel valued, safe and special.”

TSGC Principal Dr. Daniel Steele said Beard “supports the vision and mission of our school with enthusiasm and with heart.

“She doesn’t come to work each day to be adequate, she comes to work to be outstanding,” Steele said. “She makes a difference in the lives of her students and colleagues every day.”