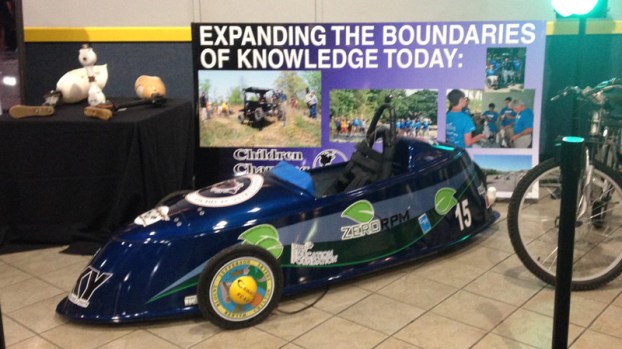 ALABASTER- Alabama filmmaker James Chambliss premiered his new documentary, “You Can Change the World,” at the Amstar 14 Theater in Alabaster on at 6:30 p.m. on Nov. 17. Those who were involved in the film were also presented with Presidential Volunteer Service Awards and Honorary Lieutenant Governor Awards after the screening.

“I met Brian Copes about eight or nine years ago in a meeting, and he started talking about the basic utility vehicles [that his class was making]. I was sitting in the audience, and I started filming this documentary in my head and thinking that this story has got to be told. Making a film is a major accomplishment. I’m so proud that I got to tell the story of these kids,” Chambliss said. “

During the trip, students delivered technological aid to the people in the small Honduran village. Students who went on the trip built basic utility vehicles, prosthetic limbs and a hydroelectric power plant from salvaged automobile parts. Some projects were completed in Honduras, and some were completed beforehand in Copes’ classroom.

“It’s an in-depth process. It took them about two years to make the projects go from concepts to actually using parts. They drew the blueprints up with a special kind of software and used a CNC Plasma Cutting Table and other tools to actually build things,” Copes said.

According to the documentary, the technology built by the students helped disabled Honduran people. It also gave the people who lived in the village more access to medical care, clean water and education.

Many people who were involved with the making of the film were presented with the Presidential Volunteer Service Award. All of the students who went on the trip, Brian and Angel Copes, James Chambliss, Noah Galloway and Sam McDonald were named as Honorary Lieutenant Governors by Lieutenant Governor of Alabama Kay Ivey.

“[Copes] is absolutely a wonderful human being and a gifted instructor. We are seeing young people in Alabama being exposed to new technology, open minds and a giving spirit,” Ivey said. “What an accomplishment it is to serve your fellow man. If your mind can conceive it and your heart can believe it, then you can achieve it.”

The students who went to Honduras graduated earlier this year. Copes also helped to establish a sister schools program between Alabaster City Schools and Jutiapa schools in Honduras.