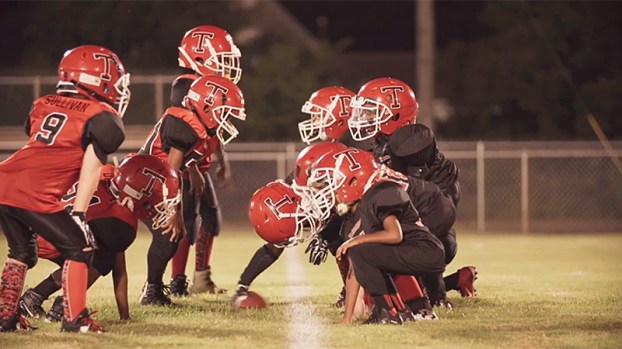 A Jack’s commercial featuring the Thompson Warriors kindergarten/first-grade team will begin airing in early 2017. The team won its championship on Saturday, Nov. 19. (Contributed)

HOOVER – For members of the Thompson Warriors kindergarten/first-grade team, victory over the Hoover Bucs in the Jefferson-Shelby Youth Football League championship on Nov. 19 was especially sweet. Not only did the Warriors avenge two regular-season losses to the Bucs with the win, they also lived out the success depicted in a commercial filmed weeks before the first snap of the season.

The Thompson kindergarten/first-grade team defeated the Bucs 24-0 in the championship game, which was played on Nov. 19 at the old Berry High School football field in Hoover, and ended the season with a 7-2 overall record.

“The two losses came to the same team we beat in the championship game, so it meant a lot to us,” said Dee Fields, who serves as the “team mom” alongside her husband and team head coach, Joey. “We are very proud of them. I’m excited that we were able to bring that championship back home to Alabaster.”

The Thompson championship team, along with other Alabaster youth and school football teams, will be featured on floats in the Alabaster Christmas parade on Saturday, Dec. 3.

“Last year, the team went 0-8, so to go from that to winning the championship, I was just speechless,” Joey Fields said. “It’s awesome for me, but it’s really awesome for the kids. I’m excited to be a part of such a good group of kids.”

Winning the championship served as the perfect ending to a season filled with excitement – Some of which began before the season even started.

Last summer, the Jack’s restaurant company began searching for a Birmingham-area youth football program to feature in its television advertising. The company’s search led to the Thompson kindergarten/first-grade team.

“They actually came out and filmed last summer, but we had to pretend like it was winter. It was so hot, but we had fun doing it,” Dee Fields said with a laugh.

The commercial depicts the Thompson team celebrating the end of their season with a mock party featuring food from Jack’s. At the time, nobody involved in the filming knew how successful the team would be during the actual season.

Following their win in the championship game, the Thompson team was treated to a celebration at the Alabaster Jack’s restaurant on U.S. 31, where they got to see the premier of their TV commercial, which is set to begin airing in early 2017.

“We wanted to do something special for these kids,” Jack’s Marketing Director Pam Measel wrote in a statement. “And a red-carpet premiere just seemed like the perfect way to end their season.”

Joey Fields said the kids are anxiously awaiting their moments in the television spotlight.

“The actual commercial doesn’t start airing until early next year, but they wanted our kids and parents to see it early on,” Joey Fields said. “I can’t tell you how excited they are to see themselves on TV.”

Greystone Elementary students thankful for family, kittens, everything in between