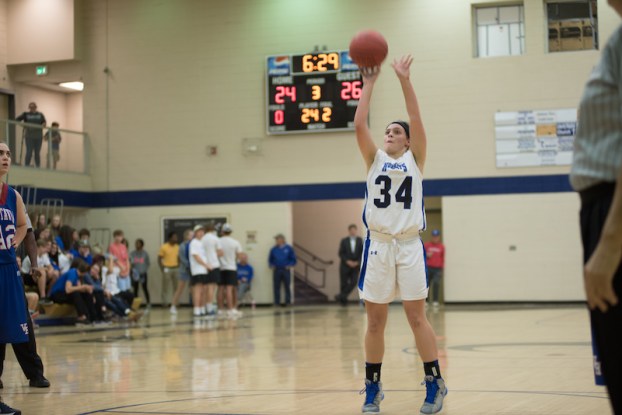 Michaella Edwards has helped the Chelsea Lady Hornets’ jump out to a 3-0 start to the season. (Reporter photo/Keith McCoy)

Chelsea boys and girls off to 3-0 starts

Both the Chelsea girls’ and boys’ basketball teams are off to 3-0 starts on the season after great performances over Shelby County on Friday night, Nov. 18.

The Lady Hornets absolutely dominated the Wildcats after four girls scored in double figures on their way to an 82-53 route over Shelby County.

Chelsea scored 20-plus points in all but one quarter of play and started out strong as they jumped out to a 25-10 first quarter lead. The second quarter was almost identical to the first as they outscored the Wildcats 22-12 to go into the half with an impressive 47-22 lead.

Even though Shelby County didn’t give up and outscored the Hornets 16-12 in the third, the first-half deficit ended up being way too much to overcome. Chelsea’s 80-plus points were a season high and possibly a school record. They are now averaging 69.3 points per game.

Michaella Edwards had a game high 30 points on 10-18 shooting from the field and 9-10 from the free throw line. She also added 11 rebounds to give her a double double on the night. Other Lady Hornets in double figures included Hope Richard with 12, Jordan Parker with 11 and Ashley Mock with 10.

In the guys’ game, Chelsea dominated from the opening tip as they started the game on a 16-0 run and finished the first quarter with a 24-1.

The defense head coach Nicholas Baumbaugh wanted to show up before the season started has officially shown up through three games this season.

The combination of Chelsea’s defense and offense was lethal in this game as the points they piled up the points in the second quarter and held the Wildcats to just four points as they took a 45-5 lead into the half.

Chelsea outscored Shelby County 24-21 in second half to close out the game and win by a final of 69-26.

Joseph Lanzi led the Hornets for the second consecutive game with 17 points, six rebounds and five assists. Josh Gregg added 10 points for Chelsea, who had 11 total players score in the game.

Yellow Jackets off to 2-1 start behind Campbell

By ALEC ETHEREDGE | Sports Editor VINCENT – The Vincent Yellow Jackets are off to a 2-1 start after taking... read more