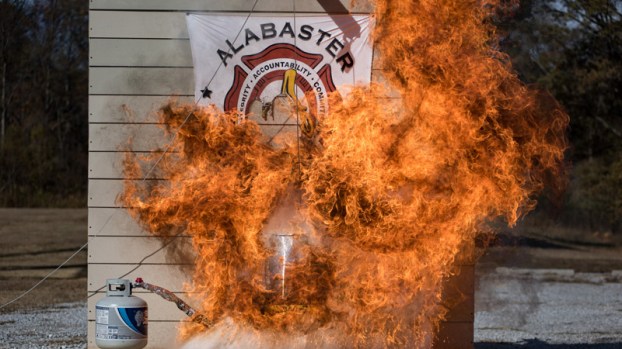 A fire erupts after a partially frozen turkey was lowered into a turkey fryer. (Reporter Photo/Keith McCoy)

Alabaster Fire Department discourages use of turkey fryers during holidays

During the demonstration, firefighters exemplified how much damage could be done when a frozen or partially thawed turkey is lowered into a turkey fryer with the hot oil overfilled.

“Across the United States, more home fires occur on Thanksgiving Day than any other day throughout the year,” Golden said. “When the turkey was lowered into the pot, it immediately flamed up and the flames were higher than the backdrop.”

Golden said that the number of deaths and injuries due to turkey fryers increases each year. The oil in turkey fryers can be easily spilled and easily overheated. The cooking pot, lid and handles can also become dangerously hot.

The National Fire Protection Association and the Alabaster Fire Dept. encourage community members to find alternate ways of cooking turkeys during the holidays.

According to Golden, there are new types of “oil-less” turkey fryers that use infrared light or electricity and are completely safe.

Golden said if turkey fryers must be used, there are many safety precautions that must be taken to prevent a fire.

“We understand that people are going to use [turkey fryers]. Make sure that they’re at least 10 feet away from any structure like a carport or a garage and they’re not being used on a wooden deck. These are things that we have seen before.”

According to Golden, cooking oil should never be heated to over 350 degrees Fahrenheit, turkeys should be completely thawed and children should be kept away from the fryer.

Golden said to never use water if a turkey fryer ignites. When water hits this type of fire, it actually creates more flames and causes the fire to spread.

“When you have a fire caused by any kind of oil or grease, you want to smother it out,” Golden said.

In the event of a fire, Golden urged community members to immediately put the lid on the pot, turn the gas cylinder off and dial 9-1-1.

“We have not encountered any fires [related to turkey fryers] during the last couple of years, but we have had several throughout the years in the city of Alabaster,” Golden said. “Thanksgiving is a day that everybody comes together with their friends and their family. We want people to be creating positive memories and not having nightmares.”