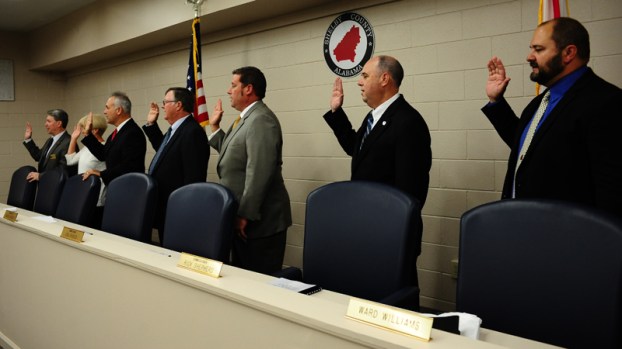 Shelby County Commssioners take their oaths of office for a new term at a meeting on Nov. 16. The commission’s District 1 seat remains vacant, and a new commissioner will be appointed by Alabama Gov. Robert Bentley. (FILE)

COLUMBIANA – Shelby County Commission members were sworn in for another term prior to the Nov. 16 meeting.

The only new commissioner was Ward Williams, who won an election for District 4 during the November general election.

“It was about a year ago that I came to my first meeting, and I had no idea what I was getting into,” Williams joked and said he is looking forward to serving the county. 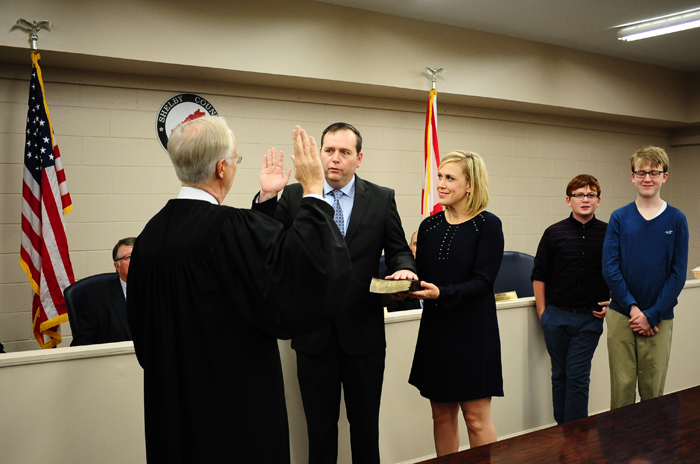 Ward Williams, the only new member of the Shelby County Commission, takes an oath of office administered by Probate Judge Jim Fuhrmeister while family members look on. (REPORTER PHOTO/STEPHEN DAWKINS)

The commissioners were administered the oath of office by Probate Judge Jim Fuhrmeister.

“It is the people who serve on county commissions and other local offices…who see their friends and neighbors at the grocery store and other public places…you are the true public servants,” Fuhrmeister said.

Fuhrmeister later said he expected the commission to continue the tradition of Shelby County being “the best county in the state of Alabama.”

•Heard a water services report including that the county is still selling water to Birmingham in the midst of a drought.