COLUMBIANA – A 20-year-old Maylene man is facing up to 20 years in prison after he was arrested and charged with allegedly choking his girlfriend during a November domestic altercation. 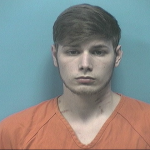 The Alabaster Police Department arrested Collin Matthew Lawley, who lists an address on Shelby County 17 in Maylene, on Nov. 20 and charged him with one felony count of domestic violence by strangulation or suffocation.

Because the charge is a Class B felony, Lawley could face up to 20 years in prison if he is convicted.

According to his arrest warrant, Lawley allegedly choked his girlfriend “with intent to cause physical harm” during a Nov. 20 domestic incident.

As of Nov. 22, Lawley was being held in the Shelby County Jail without bond, as his bondsman on a previous second-degree receiving stolen property charge surrendered him to the jail after he was arrested on the domestic violence charge.

Lawley allegedly did not appear for an Aug. 24 court hearing on the receiving stolen property charge, which led to his bondsman surrendering him to the jail.