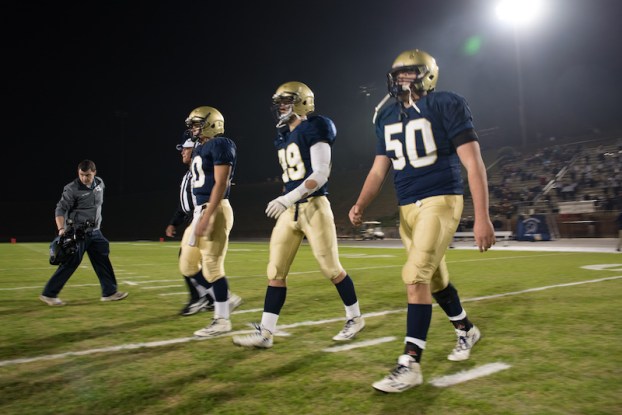 Briarwood will return home on Friday, Nov. 25, to take on the Wenonah Dragons in the semifinals of the state playoffs. This will be a rematch of a game that took place back on Sept. 9, but this time a trip to Auburn for the state championship is on the line. (Reporter photo/Keith McCoy)

NORTH SHELBY – The Briarwood Christian School Lions (12-1) have advanced to the semifinals of the 5A AHSAA playoffs for the first time since 2011 after they defeated Mortimer Jordan for the second time this season by a score of 15-0 on Friday, Nov. 18. The shutout was the Lions second of the year for a defense that is getting better and better each week.

Not only did Briarwood make it to the semifinals, but they got a huge break as well. The Lions won’t have to travel to face No. 1 Scottsboro. Instead they get to host Wenonah (10-2) who upset Scottsboro and gave them their first loss of the season this past Friday.

Now, for the second week in a row Briarwood has a rematch of a game they won earlier this season. Back on Sept. 9, Briarwood took down the dragons 15-14 in a game they were on the brink of losing. After falling behind 14-0 in the first half, the Lions scored 15 unanswered points in the second for the comeback win.

That game ended up being Wenonah’s only region loss of the season keeping them from a region championship, which I’m sure will be fueling the Dragons’ fire during the rematch.

Briarwood was one of only two teams to hold this potent Wenonah offense under 20 points. The other was Bessemer City who also held them to 14. The Dragons scored 40 plus points four times during the regular season and have done so in all three of their postseason games. On the season they have averaged 35.25 points per game up to this point, and just during the playoffs that jumps up to 44.3 points per game, showing it will be a tough task for the Lions to contain them defensively for the second time.

As rousing as the Wenonah offense has been, their defense has been almost as good if not better. The Dragons have posted two shutouts on the season, held 6 of the 12 teams they have faced under 10 points and 10 of the 12 under 20 points. On the season they are only giving up 11.8 points per game. They are playing like a championship team has to play, but will face off against probably the hottest 5A team in the state.

Briarwood’s lone loss of the season came way back on Aug. 26, when they lost at the hands of 6A Chelsea 43-15. They have now rattled off 12 consecutive wins in impressive fashion outscoring opponents by 18 points per game. This is quite simply because they are so fundamentally sound on both sides of the ball.

Offensively on the season, the Lions have been one of the better teams in the state scoring more than 30 points on six occasions and averaging 28 points per game, but even when their offense doesn’t go crazy with points, the defense does their job to win the ball game.

Just like Wenonah, Briarwood has posted two shutouts on the season and held six teams under 10 points. They’ve also only given up 20 plus points twice this year, 21 to Shelby County and 43 to Chelsea. Since the loss to the Hornets they have only given up an impressive average of 10 points per game.

Even though both offenses are high powered, when you have defenses playing as well as these two are this deep in the playoffs you don’t expect teams to come out and score 40 points. I fully expect both coaching staffs to be a little cautious so their teams don’t make mistakes meaning we will see a defensive battle that could go either way.

Having seen this Briarwood defense in person this past couple of weeks, they are flying to the ball and not allowing any big plays down the field. I just think they are playing their best football of the season on the defensive side of the ball, which will be enough to advance the Lions to their first state championship game since 2010.

By ALEC ETHEREDGE | Sports Editor TRUSSVILLE – The Oak Mountain Eagles (4-1) got off to a 2-0 start on... read more