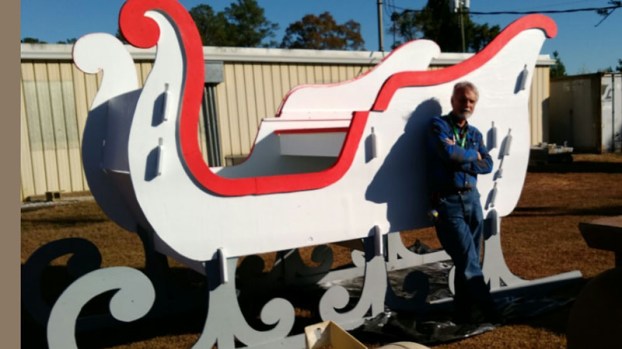 Students at the College and Career Center recently built a giant sleigh for the Roanoke Christmas Parade on December 10 in Roanoke. A Roanoke family reached out to CCC teacher Van White’s Construction Technology class.

“The students made quite an accomplishment in a month,” White said. “We were honored that [the family] thought that much of our program.”

The family sent the pattern for the sleigh last June, and the class was given a deadline for Nov. 21. White said that the sleigh stands 10 feet tall and is 8 feet wide. The students made it out of plywood, and they also painted and primed it. It took the class one month to build the sleigh.

“This was a student led project. They were given huge patterns and had to cut them out precisely,” White said. “Students used patterns with carbon paper. Each student was assigned a position. We’re trying to duplicate real life.”

White said students had to account for shrinkage due to the material they used to build the sleigh.

The sleigh was designed to be taken apart for storage. White said this helps to keep the sleigh in good condition.

“If they’ll take it apart and store it correctly, it can be passed down from generation to generation,” White said. “I’d like to see the sleigh last for about 50 years.”

According to White, his classes have completed similar projects in the past. The classes are currently planning on building more structures later in the academic year. White believes that projects like these will help his students assimilate into construction jobs right out of high school.

“When I told my students about the project, they looked at me and said ‘with your help, nothing is impossible.’ I want them to keep that attitude for the rest of their lives. We’re trying to tell [the students] that there’s an alternative to going off to college and getting yourself into debt,” White said.

White said that this project earned the CCC Construction Technology Department about $230. His class plans on building a giant replica of Rudolph during the next holiday season.

White said that he is glad that one of his projects was able to benefit an entire community.

“The whole [Roanoke] community is going to be so excited that they’ve got this unique, giant sleigh. This is going to be the feature of the parade,” White said.