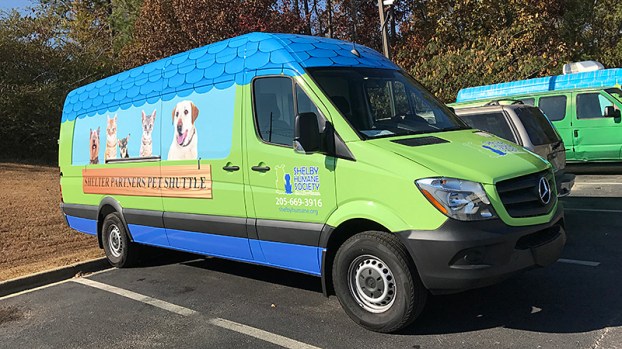 A grant from Petsmart Charities, worth $180,000, allowed the shelter to purchase a new Sprinter van to help with animal transports. (Contributed)

COLUMBIANA – The Shelby County Humane Society recently received a grant that will help the agency transport animals to new homes across the country.

The grant from Petsmart Charities, worth $180,000, allowed the shelter to purchase a new Sprinter van.

“We applied for the grant to help fund a new Sprinter because our old Sprinter had more than 350,000 miles on it,” said Cassidy Sklar, transport and grants coordinator for Shelby County Humane Society. “It was getting very difficult to repair constantly.”

Sklar said the shelter had previously been accepted into Petsmart Charities Rescue Waggin’ Program, which helped with animal transports.

“They coordinated everything,” Sklar said. “All we had to do was get the animals ready, get the information together, and they would show up at our doorstep twice a month and transport our animals. It was about $1,200 a transport to do on our own, so Petsmart was willing to do the transports and have everything handled.”

When the shelter received word that the transport program through Petsmart was being shut down,

Sklar said employees at the shelter were unsure how they would fund a transport program.

“We had done our own transports before for about seven years or more, but we had not been fundraising for transports, and when we found out the program was not going to be offered we were unsure of where the money was going to come from,” Sklar said. “We applied for a grant to help fund a new Sprinter van. Petsmart came through in an amazing way with funding.”

Sklar said the grant went toward the purchase of a new Sprinter, and special crates for the dogs to travel in.

“In the past, we had wire crates to stack on top of one another, but now the dogs will be much more comfortable,” Sklar said.

Currently, the shelter sends typically about 30-35 dogs in one single transport to places across the country where there is a greater need for animals.

“We were almost in tears when we got the approval for the grant,” Sklar said. “We were truly thrilled to receive it.”

Sklar said all drivers for the shelter’s transport program are volunteers, and there is always a need for more drivers.

For more information about becoming a volunteer for the transport program, contact (205) 669-3916.

By EMILY REED / Special to the Reporter ALABASTER – Alabaster’s Kingwood Church is gearing up to present a longstanding... read more