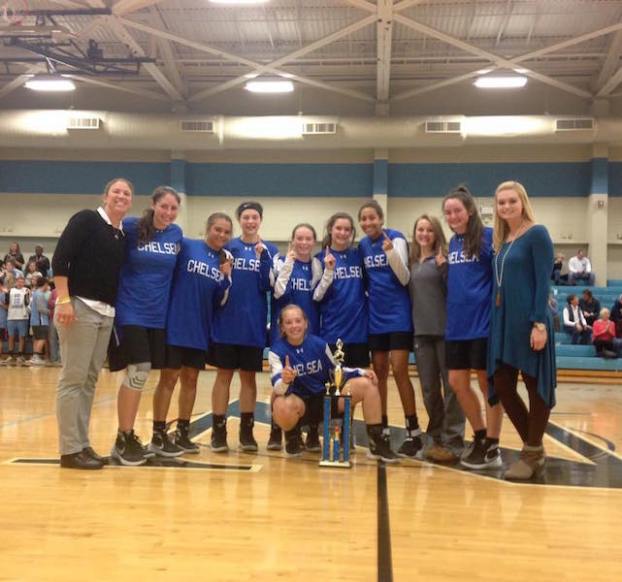 The Chelsea Lady Hornets’ basketball team is off to a 5-0 start after winning the Northridge Jaguar Invitational on Nov. 21 and 22. (Contributed)

TUSCALOOSA – The Chelsea girls’ basketball team (5-0) took home the Northridge Invitational Championship after beating Fayette County 65-27 in game one of the tournament and Southside Selma 51-46 in the championship game.

In game one, Sophomore Michaella Edwards continued her hot start to the season as one of the best girls’ basketball players in the state. She led all scorers with 36 points, which was her third game of the young season with 30 plus points.

The first quarter was tightly contested with Chelsea only outscoring Fayette County 12-8. The second quarter, however, was a lopsided turn of events. The Lady Hornets turned up the heat on both ends of the court and outscored the Tigers 21-3 in the quarter. That’s all they would need to win game one as they outpaced Fayette 32-16 the rest of the way to win by a final of 65-27.

Edwards also added 15 rebounds to her 36 points, six on the offensive end, which gave her a double double.

The championship game against Southside-Selma was a much closer contest. Chelsea yet again jumped out to an early lead as they outscored the Panthers 12-10 in the first quarter, but the Hornets finally faced some adversity for the first time in the tournament when Southside went on a 14-7 run in the second quarter to take a 24-19 halftime lead.

Chelsea made the appropriate adjustments and wiped away the Panthers’ lead with a 14-9 third quarter, which set up a tie 33-33 game as they headed to the fourth and deciding quarter for the championship.

The fourth was a closely contested quarter, but in the end Chelsea was just too much for Southside as they scored 18 fourth quarter points to the Panthers’ 13 and went on to win the Northridge Jaguar Invitational championship by a final of 51-46.

Edwards led the way for the Lady Hornets again with a game high 24 points and 15 rebounds. This time she grabbed 10 boards off the offensive glass as the Panthers struggled boxing her out the entire game. This marked Edwards’ third consecutive double double dating back to a win over Shelby County on Nov. 18. Freshman Jordan Parker added seven points, 11 rebounds and three assists, while senior Kathryne Shoop added seven points, seven rebounds and four assists.

Through five games Edwards has 149 points, 55 rebounds, 15 steals and three double double’s. That’s been good enough for an average of 29.8 points, 11 rebounds and three steals per game.