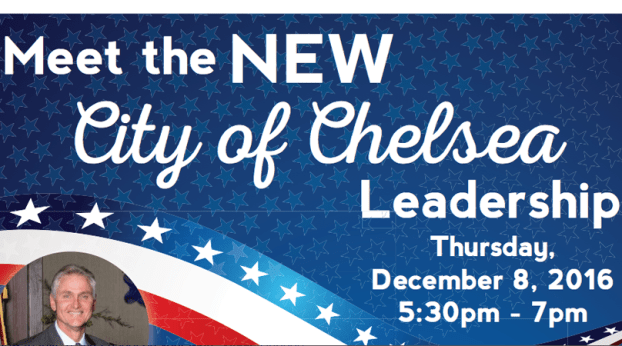 Newly elected officials in the city of Chelsea discussed their goals for the city’s businesses at the law offices of Boardman, Carr, Petelos, Watkins and Ogle, PC on Dec. 8. (File)

Chelsea business owners and residents will have the chance to meet with the newly elected mayor and city council members at the law offices of Boardman, Carr, Petelos, Watkins and Ogle, PC. The event will take place at 5:30 p.m. on Thursday, Dec. 8, and will be co-hosted by the South Shelby Chamber of Commerce and the Greater Shelby County Chamber of Commerce.

“We wanted people to have the opportunity to hear from the newly elected mayor and city council members, and also let the residents and business owners ask questions of them,” South Shelby Chamber of Commerce Director April Stone said.

According to Stone, this event was partially organized in response to the city of Chelsea electing so many new council members, a new mayor and new members of the Planning and Zoning Commissions.

“Chelsea has such a tremendous foundation set by former Mayor Earl Niven, and has a very good team in place now. We’ve got a lot of new faces and personalities coming in. The excitement level is very high in Chelsea right now,” Stone said.

Stone also said the event was inspired by the city’s potential for future growth and development.

“Chelsea is slated to be the second fastest growing community in Shelby County over the next 10 years. There is so much potential in that community,” Stone said. “They have the retail base and the land availability to become the community that they want to be. They have a very strong, small town feel for over 12,000 people. They have safety and good schools. They have the right mix of everything.”

Stone said that, while a connection between Chelsea business owners and the city council already exist, this event will help strengthen their relationships.

“This is an opportunity to hear [the council’s] plans and goals for Chelsea, and to have an idea of where the city is headed over the next 15 years,” Stone said. “The business community will be affected by the growth that is coming. Having that open line of communication between businesses and the city council is crucial. This will enhance that line.”

Those in attendance will be encouraged to speak with city officials, ask questions and voice their concerns. Stone said that the event will also give city officials a better understanding of the needs of community members.

“Like all of the other cities in Shelby County, [Chelsea officials] want to hear questions and concerns. That’s how the city will grow,” Stone said. “Some officials are current business owners. They’re going to have a dual perspective, where they know about the challenges and the successes of doing business in Chelsea. Now they have the municipal perspective.”

No RSVP is necessary. There is no cost to attend, and all members of the community are encouraged to meet the newly elected Chelsea leadership.

The South Shelby Chamber of Commerce will be hosting their monthly Morning Mixer on Thursday, Dec. 8 at 8:30 a.m.... read more