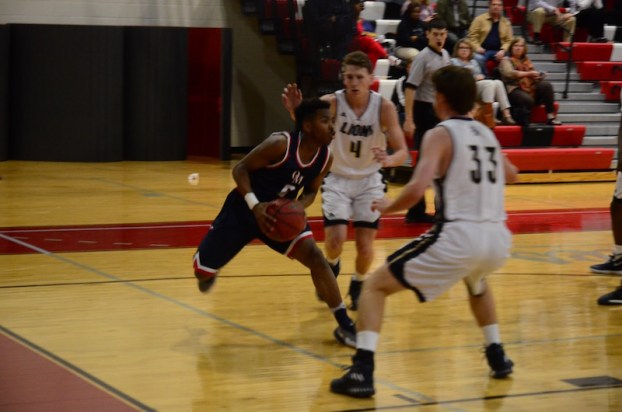 Oak Mountains' Kris Hutchins tries to get out of a double team set by Briarwood defenders during the third place game of the Bryant Bank Championship. (Reporter photo/Alec Etheredge)

TRUSSVILLE – The Oak Mountain Eagles (4-1) got off to a 2-0 start on the 2016-17 season after they downed Stanhope Elmore and Thompson in their first two games before they headed into the Bryant Bank Thanksgiving Tournament at Hewitt-Trussville High School Nov. 19-22.

The Eagles took on Stanhope Elmore in round one of the tournament and defeated the Mustangs 68-38 to advance in the winner’s bracket and improve their record to 3-0 on the season. Chis Mayweather led the way for Oak Mountain with 14 points and six rebounds, while Will Stephenson added 12 points and three assists.

Oak Mountain faced a tough Lee Montgomery team in the semifinals that came into the tournament 2-0 and left 5-0 as the tournament champions. The defense held its own by holding the Generals to just 53 points, but the offense wasn’t able to matchup to Lee’s tough defense and was only able to score 40 points in the 53-40 loss. Will Stephenson had another good game as he accounted for half of the Eagles’ points with 20 and also added four rebounds on the night. The loss set up a matchup with Briarwood in the third place game the following day.

In the third place game Oak Mountain was clearly the better team with over half of Briarwood’s players unable to play in the game due to them preparing for a semifinal matchup on the gridiron. The Eagles took advantage of the Lions younger team as they went on to take the third place game 44-19.

Early on in the game both defenses played hounding zones that gave each offense a ton of trouble. Finally, about four minutes into the game Oak Mountain’s Kris Hutchins made the first basket of the game, which was followed immediately by a Briarwood bucket from Steven Giddens. The Eagles started on an 8-2 run and took a 10-6 lead into the second quarter.

The Lions came out and went on a 5-0 run to start the second and grab their first lead at 11-10. That lead, however, was short lived and ended up being Briarwoods only lead of the game. Oak Mountain answered with a 9-0 run to end the half and led 19-11 after two quarters of play.

The Eagles came out and continued the run in the third quarter eventually scoring a total of 15 unanswered points between the second and third quarter, which took their lead to 24-11. Oak Mountain followed that up by going three minutes without scoring and Briarwood tried to take advantage as they went on a 6-0 run to cut the lead to 24-17, but this was the last bit of fuel the Lions had in the tank.

The Eagles finally started penetrating the zone defense and got some inside scoring, which also set up open three’s down the stretch. They were able to rattle off a 17-0 run between the third and fourth quarter and ended the game on a 20-2 run as they went on to win the third place game by the 44-19 final.

Neither team shot particularly well from the free throw line as Briarwood shot three of 10 and Oak Mountain was nine of 20. Oak Mountain came into the game shooting lights out from three and Will Stephenson tried to continue that trend as he drained four three’s on his way to 14 points. Stephenson was the game’s only double digit scorer. Zac Nuyr led Briarwood with seven points, while Brayden Blythe added six.