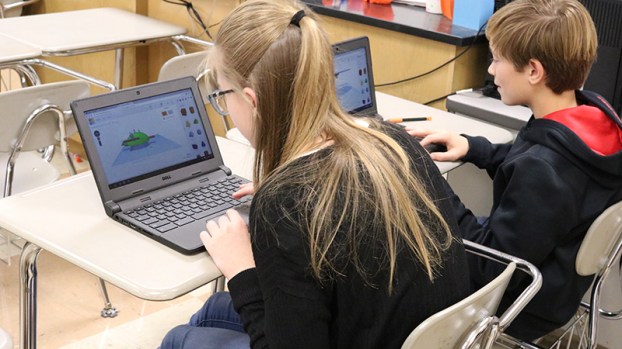 ALABASTER – Students at Thompson Middle School are learning various design techniques through the use of a newly purchased 3D printer.

“3D printing is really gaining momentum in education and technology right now,” Thompson Middle School science teacher Suzanne Lee said. “There are so many careers these kids have the potential to be involved in that we don’t even know about yet. The earlier we expose them to different technology, the more prepared they will be and then they can look back and say ‘oh yeah, I did that in middle school.’”

Lee said TMS is always looking for ways to integrate technology into the classroom.

“This summer Mr. Anthony Kingston, the technology coordinator for the Alabaster School District, took large group of teachers to the Alabama Education Technology Conference,” Lee said. “We were able to see a 3D printer at the conference, and I had never dreamed about putting one into a middle school classroom. At that conference, I made my mind up that I wanted one so we found the funding to buy one.”

Lee said TMS received the printer in July, and she spent time learning how to use it before introducing it to the students.

The first project students worked on was in Patricia Tauber’s eighth grade social studies class where the students designed ancient Chinese coins used by the Qin dynasty in 3D format.

Students studied about ancient China and how Shi Huangdi helped unify China by using a standardize system of money.

“It was amazing to see what the kids came up with,” Lee said. “They had the opportunity to look up different markings on the coins and create their own.”

Another project the students worked on was in Lee’s class where they created organisms of animals after studying about adaptations.

“It really impressed me with their ability to figure everything out,” Lee said. “They came up with some cool things. We feel like the earlier we can put this type of technology in these kid’s hands, the better. It paves the way for careers in engineering, the medical field, graphic designers, and architecture among many others.”

Jackson Wade, a seventh grader at TMS, said he really enjoyed working with the printer and making his own 3D model.

“This project could be useful for the future of architects, so that they can make a small model or design of their ideas or plans,” Wade said.

Anna Cate Tanner, who is also a seventh grader at TMS, said the 3D printer is “awesome.”

“I love that I can imagine something and then make it real,” Tanner said.