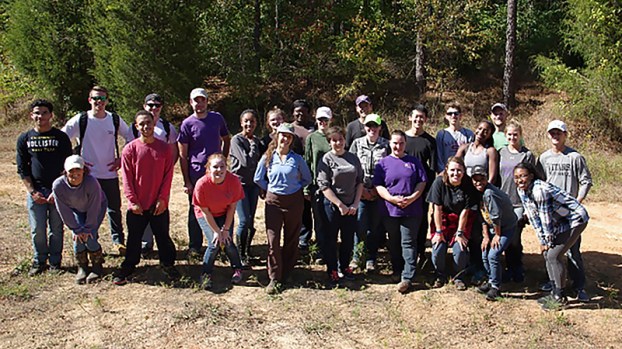 Students from the University of Montevallo came out to lend a helping hand at the Bibb County Alligator Complex. (Contributed)

The students worked with members of the Alabama Plant Conservation Alliance, educators, plant professionals and other citizens. They chopped away at the unwanted, encroaching vegetation, which threatens endangered native plant species.

The Alligator Glade complex is home to many rare plants, including nine varieties found nowhere else in the world. One of these species, the Xyris spathifolia Kral & Moffett, was discovered growing in the complex in 2009.

“Episodic drought and fire suppression activity have resulted in encroachment by various native and non-native shrubs and greatly reduced the size of the X. spathifolia population,” Mike Hardig, APCA member and UM Professor of Biology said.

Expeditions have failed to find other populations of the plant in the glades, and a 2015 survey detected fewer than 20 specimens.

According to Hardig, the restoration of Alligator Glade is crucial for the preservation of X. spathifolia in its natural context.

The APCA developed a comprehensive management plan to achieve the restoration of the complex, and the work on Oct. 8 was the first step of that plan.

Hardig organized the UM volunteers in an effort to help the APCA clear out the glades. The professor attempts to organize at least one conservation cleanup event each semester as an extra credit opportunity for his students.

Hardig believes the chance for students to go beyond the walls of the classroom and engage with the environment they learn about is an important part of their education at UM.