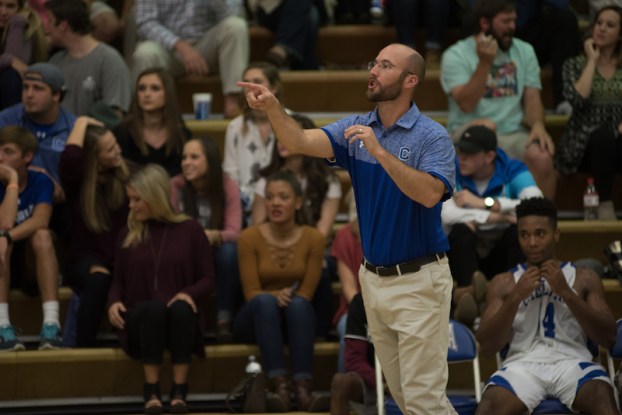 The Chelsea Hornets’ basketball team fell to 4-2 on the season after losing two one point games in the North Shelby Tip Off Classic hosted at Chelsea High School over Thanksgiving. (Reporter photo/Alec Etheredge)

CHELSEA – The Chelsea Hornets (4-2) hosted the North Shelby Tip Off Classic at Chelsea High School Nov. 21-23. The Hornets got off to a 3-0 start on the season behind great defense and several players contributing points. They advanced their record to 4-0 to start the tournament, but after two heartbreaking losses in the second and third round, they fell to 4-2 on the year.

Chelsea opened the first round of the tournament with a 75-38 win over John Carroll to continue its undefeated season. For the second game in a row the Hornets had 11 different players contribute points in the contest. Joseph Lanzi led Chelsea with a game high 17 points, while Matthew Marquet and Josh Hanna added 12 and nine, respectively.

The offense was aplenty in the first quarter as Lanzi had 11 of his 17 points during the quarter, which helped Chelsea scored 22 points and jump out to a 22-16 lead. The Hornets scored 15 more in the second quarter to take a 37-29 lead into the locker room. The fourth quarter, much like the first, was an offensive explosion, but this time the defense stepped up as well as Chelsea outscored John Carroll 25-6 to take a 62-35 lead into the fourth. The Hornets were able to hit seven of their eight free throws in the fourth, which sealed the 75-38 win.

In the semifinals, Chelsea faced off against Talladega in a game they went on to lose in heartbreaking fashion 58-57. The game was back and forth for the most part with neither team able to grab more than a seven-point lead at any point throughout. Talladega was ahead at the end of every quarter leading 16-13 after one, 27-25 at the half and 40-38 at the end of the third.

In the final minute of play the Hornets were up 57-56 with the ball, but the Talladega pressure caused a Chelsea turnover. Duncan Ashton was then fouled and made both free throws to put Talladega ahead 58-57. Free throws overall were a big difference maker in the game as Talladega shot 17-23 from the line while Chelsea was 11-20. Lanzi got a shot off at the buzzer, but it didn’t fall as the Hornets lost their first game of the season. Lanzi had 30 points on three of five from behind the arc and seven of seven from the free throw line. Tyler Coleman also added seven points for Chelsea. Ashton led the way for Talladega with 18 points.

In the third place game, Chelsea lost another tough one-point game 52-51 at the hands of Childersburg. The Hornets jumped out to a 17-11 lead in the first quarter after Lanzi chipped in seven of his 20 points. Childersburg outscored Chelsea 12-8 in the second as they cut the lead to two heading into the half. Lanzi added 11 more in the third quarter to help the Hornets escape with a one-point 38-37 lead heading into the fourth. The lead went back and forth in the final quarter, but Childersburg took the lead with just over a minute to play and didn’t relinquish it as they held on to win 52-51. Lanzi was named to the All-Tournament team after averaging 22 points per game during the tournament.