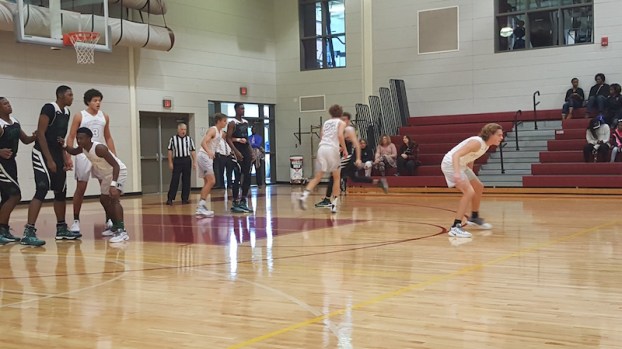 ATLANTA, GA – The Pelham Panthers’ basketball team traveled to Atlanta over Thanksgiving break to take part in the Holiday Hoopsgiving Tournament, which brought together several premier high school basketball squads. Pelham went 2-0 in the tournament after they took down Friendship Academy from Washington D.C. and Benedictine Prep from Virginia.

“Our guys were excited to participate in the Hoopsgiving Invitational and play against some of the top teams in the Southeast,” said Panthers’ head coach Joel Floyd.

The Panthers (3-1) defeated Friendship Academy 64-31 in the first round of the tournament. The Panthers opened the game with a 12-0 run and never looked back.

Pelham led 17-5 after the first quarter of play thanks in large part to Justin Allison contributing 12 of his game high 27 points.

In the second quarter, Alabama commit Alex Reese got a steal and layup that extended the Panthers lead to 21-8. On the Panthers next three possessions, Allison made three consecutive three pointer and Pelham led 30-10 with 3:29 left in the half. Pelham ended the quarter on a 7-2 run and took a 37-12 lead into the half.

The Panthers outscored Friendship 27-19 in the second half to win by the final of 64-31 and improve to 2-1 on the season.

Allison led the Panthers with 27 points and also added 6 rebounds and five assists, while Reese had 15 points and seven rebounds.

“This was a good test for our team early in the season,” Floyd said. “Benedictine is a perennial powerhouse in Virginia high school basketball with several state championships in the last decade. Our guys came out focused and ready to take on the challenge.”

An Alex Reese dunk off a Justin Allison assist early started the game with some action as the Panthers tied things up at 2-2 with 7:20 left in the first quarter. The rest of the first was a back-and-forth affair. With 22 seconds to play, Pelham trailed 15-12, but Allison made two free throws, which cut the lead to 15-14 heading to the second.

The scoring from both teams continued in the second as Pelham outpaced Benedictine 17-14 in the quarter to take a 31-29 halftime lead.

Pelham started the third quarter on a 12-5 run after Allison made a three with 4:56 left to extend their lead to 43-34. With 3:24 left in the quarter, Reese scored on a dunk and the Panthers led 45-37. The Panthers led by nine the majority of the quarter and took an eight-point lead into the final quarter of play.

The Panthers started the fourth quarter on a 9-3 run to extend their lead to the largest of the game, 14, and take a 62-48 lead. With 5:28 left in the game, Rottier made a layup and Pelham led 64-50. Benedictine made a run and cut the lead to 74-70 with just under 30 seconds to play, but four made free throws by Pelham and no made baskets by Benedictine ended the game at 78-70.

“They executed offensively and did a great job defensively against an extremely talented team,” Floyd said. “This tournament was a tremendous experience for our program to be a part of. We enjoyed competing against some very quality teams. This weekend was something we look to build on going forward.”

Allison had 34 points, 6 rebounds, 5 assists and 2 steals for Pelham, while Reese added a double double with 22 points and 10 rebounds. Seth Torman also had a good game and gave Pelham three double digit scorers with his 11 points.