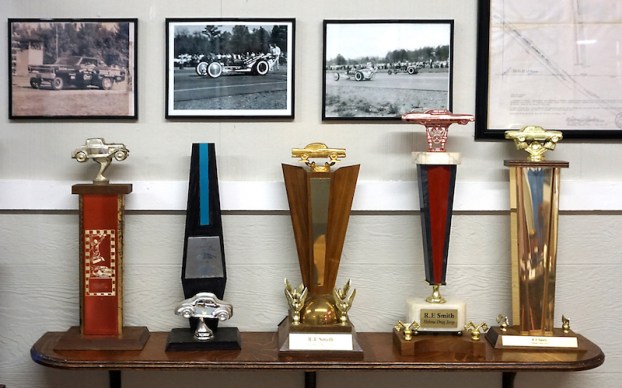 The Helena Drag Strip memorabilia collection at the Kenneth R. Penhale Historic Museum has expanded to include trophies from the 1960s, displayed with black and white photographs of the cars and racers. (Contributed)

On Sept. 11, 2016, the Kenneth R. Penhale Historic Museum celebrated its fifth anniversary and has in the past few months received new items of interest.

The Helena Drag Strip collection of memorabilia has continued to expand, having just added trophies from the 1960s from R.E. Smith and Charles Potera. Above the trophies are several black and white photos of the cars and men in action.

The Helena Drag Strip was first just a cornfield where young men enjoyed racing their cars. Locals did it for the sport, but it grew and eventually attracted people from all over the United States. The 1957 National Champion “Big Daddy” Don Garlits even raced here.

You can get your own Helena Drag Strip T-shirt, as well, when you visit the museum.

Charles Griffin has long been a supporter of the museum, donating collectible Indian artifacts, such as Trade Beads that may date from the 1700s, over the years. He recently purchased and gave two outstanding items, a drum and a highly unusual musical instrument with a long neck and somewhat gourd-shaped body made of stitched hides, with two strings and two tuning keys.

The Indian Drum, estimated to be between 200-300 years old, was in a private collection in middle Tennessee where Griffin obtained it.

Showcased also are Clay Bead Necklaces found in North Alabama. These would have been made before white contact.

On another wall is a grouping of old telephones. The Helena Telephone Exchange was brought in 1913 by C.T. Davidson and the switchboard was placed in the building by the amphitheater, later used as police station and jail and now housing Lazy Boy BBQ.

Another addition is a William Foster Triple Crown Anvil made in England in 1950. It was last used at the Boothton Mines southwest of Helena and was given to Herbert McGoughy that year when the mines closed. It was donated by his son, H. G. McGoughy, of Montevallo.

The Helena Historic Preservation Committee again raised funds via Founder’s Day in 2016. Checks were presented to the museum, Jane B. Holmes Library, the Helena Belles the Teen Council and the Fire Explorers.