“You have been chosen randomly as a juror for tonight’s show. Your job is to listen carefully and decide at the end whether Karen Andre murdered Bjorn Faulkner,” read the program from “Night of January 16,” the recent fall performance by HHS Theater students.

“Night of January 16,” written by Ayn Rand and performed on Broadway in 1935, might seem an unusual choice—both stark and dramatic. 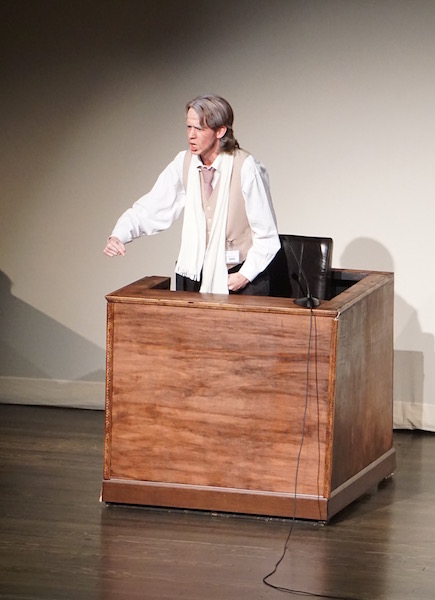 “I wanted students to experience something different than a musical or a comedy,” said teacher Jefferson Casey. “Because this is a courtroom drama, there is not so much action and the two attorneys have to sell themselves to both the jury and the audience. The actors had to work on a much more nuanced performance.”

The lighting during the performance was also tightly controlled for maximum effect paralleling the action on stage as the play reaches a climax and the verdict.

In the original play, audience members were brought onstage to be jurors. At HHS, the jury was represented by various students who sat in a shadowed jury box, but each member of the audience could also participate via their program.

Outstanding performances were given by all the main characters. The show was double cast, but on­­ opening night Attorney Stevens was played by Ashli Funches; District Attorney Flint by Lauren Beagle; Karen Andre was played by Kaija Ray; “Guts” Regan by Jarrett McMeans; Judge Heath by Magali Martinez; Magda Svenson by Julia Stith, and the character John Graham Whitfield by HHS senior Houston Byrd.

“My experience with ‘Night of January 16’ was definitely interesting,” Kortwright said. “I learned a lot about my abilities as an actor through this role, as the character was very different from others I’ve played, as well as who I am as a person.

“I’m so incredibly grateful for the HHS Theatre Department, where I discovered how much I love doing this,” she adds.

This sentiment was echoed by every student involved with high praise for Jefferson Casey as director and theater teacher.

Kortwright was in last spring’s production of “The Music Man” and currently plays Narrator One in the ensemble piece, “7 Ways that Pokemon Go is Destroying Your Life” by Don Zolidis.

This won Best in Show for Ensemble at the recent Trumbauer competition held at PHS. It will be presented at State Trumbauer at UNA in early December.

The spring production by HHS Theater students, March 16-19, will be “Romeo & Juliet: A Comedic Modernization.”