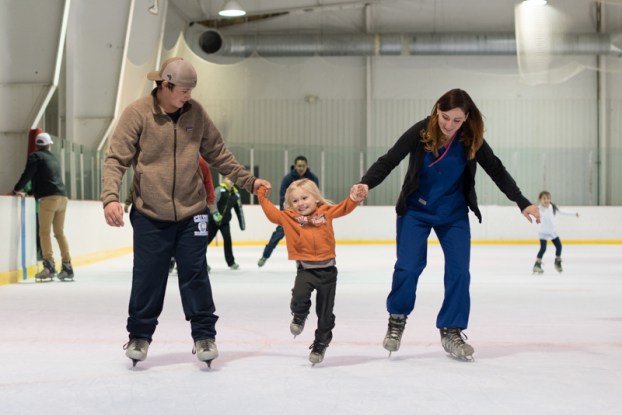 Guests enjoyed Cookies and Cocoa with Santa in the banquet hall, light hors d’oeuvres, Christmas carols from the PHS Choir and photo opportunities to take photos with Santa.

The practice ice rink featured free ice-skating and the concession stands were open as well. The lobbies of the main arena and the banquet hall featured decorated Christmas trees where many residents posed to take family pictures, and the Pelham Beautification Board members handed out commemorative ornaments to families as they entered the civic complex.

Friends MaryAnn Bush, of Calera, and Misty Grayson, of Briarfield, traveled to Pelham Monday night to attend the event. Bush, who follows the Pelham Civic Complex’s Facebook page said she saw a post about the event and thought it sounded like fun.

Bush attended the event with her three children and two grandkids.

“This seemed like a good way to kick-start the Christmas season,” Bush said. “My 3 year old grandson is ice skating for the first time and he’s hooked. It’s like live entertainment watching all the kids out there.”

This year’s open house was a bit different than in previous years, with residents being free to come and go as they pleased. The Christmas Open House is traditionally a more formal, sit-down program with singing from choirs in grades K-12, iceskating performances, a tree lighting and an inspirational message from a local pastor.

However, with the Ice Arena’s main rink under construction, the city was not able to host its usual program on the main rink. Pelham resident Christina Jones, who has attended the open house in previous years, she said didn’t mind a more laid back environment.

“I prefer the laid back atmosphere,” said Jones, who attended with her daughter and her daughter’s friend. “If we want to leave we can, or we can stay for the entire time. It’s more easy-going.”

Jones, who’s daughter performed in the program last year and had to be dropped off at the event early, said it was hectic trying to get her daughter to the event on time after getting off work.

Jones noted that this year’s event wasn’t as widely attended as in past years. She said thinks the student performances in previous years drew more people to the event.

But one thing Jones said she looks forward to every year is getting the Pelham Christmas ornament.

By LAURA BROOKHART / Community Columnist “You have been chosen randomly as a juror for tonight’s show. Your job is... read more