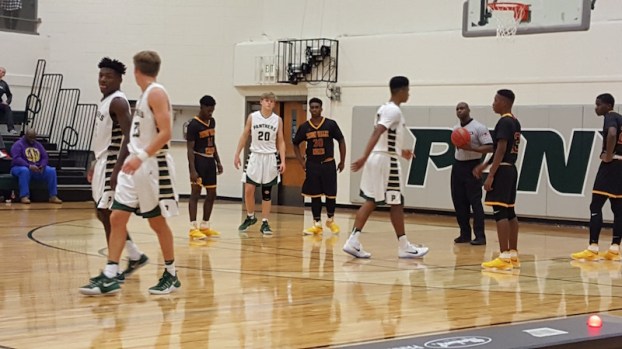 The Pelham Panthers have won three games in a row after taking down Pinson Valley 80-70 on Monday, Nov. 28. Alex Reese and Justin Allison have created a duo that will be tough to stop. (Contributed)

PELHAM – The NBA has made super teams a topic of conversation, specifically the concept of the big three, well the Pelham Panthers have created their own super team with the big two. Alabama commit Alex Reese and 2018 point guard Justin Allison came into their Tuesday, Nov. 29, matchup with Pinson valley averaging more than 20 points per game apiece and didn’t disappoint in this one either as they beat the Indians 80-70 in a non-area game.

“A real hard battle tonight, Pinson Valley plays hard and our guys did a great job to match their intensity,” said Panthers Head coach Joel Floyd. “Proud of the effort we had all night, it was a great win by these guys tonight.”

Pelham (4-1) scored first in the game off a Seth Torman pass to Mitchell Rottier for a layup and 2-0 Pelham lead. The game was tight up until a 6-6 tie before Pelham went on a 10-0 run that included a Reese dunk to put the Panthers up 16-6 after one. Reese had six points in a quarter that saw four different Panthers score.

In the third quarter, Pelham went on another run, this time they outscored the Indians 21-6 in the quarter. Allison had seven more points and helped the Panthers jump out to a 50-31 lead.

Pinson Valley battled back in the fourth to try and make the game interesting as they went on several runs, but could never get closer than 10. Pelham dominated this game from start to finish and the 80-70 final made the game look a lot closer than it actually was. It marked the second time the Panthers have taken down the Indians as they also beat them 69-59 in their season opener.

Allison led the Panthers with a game high 28 points, while also adding seven rebounds and three steals. Reese had 20 points and led the team with 12 rebounds and 5 blocks. Rottier added 14 points to give Pelham three double digit scorers in the game.

The Panthers have now won three games in a row since their loss to Mountain Brook back on Nov. 18, and look like a much improved team with the offense clicking on all cylinders.