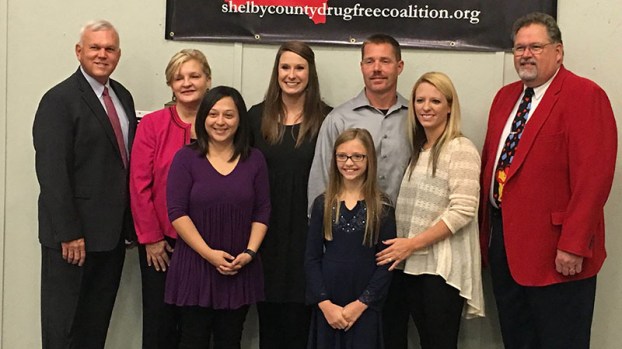 Jordan Sprich of Helena Intermediate School receives a Character in Action Award. She was one of four students to receive the award from Helena schools on Nov. 9. (Contributed)

Andrew Bush of Helena High School, Jordan Sprich of Helena Intermediate School, Matthew Ray of Helena Middle School and Van Langford of Helena Elementary School were all honored with Character in Action Awards, which began in 2014 to recognize school children for their positive actions and strength of character.

On his nomination form, HHS administrators and teachers praised Bush for his generosity toward others, his involvement in school as the co-president of Peer Helpers, FCA, the basketball team, H-Club, student leadership and for being a leader at church.

Sprich was complimented for her excellent manners she displays as well as the respect she shows to everyone she meets, according to her nomination form.

“She sits with different people at lunch every day because she says she wants to get to know everyone,” read the nomination. “This takes courage to step out of her comfort zone and befriend all of her peers.”

Ray was commended by administrators and teachers at HMS for his discipline and good behavior.

“I’ve known Matthew for three years and he has never received a correction from me regarding his behavior,” read his nomination form. “In my 12 plus years of teaching, that is a first for me and a middle school boy. He leads the bases by example and with his singing.”

Ray was also praised for his friendship he shows toward others and treating other students fairly.

Langford was commended for his self-discipline, responsibility, perseverance and courage.

“When the name Van comes to mind, the first thing I think of is ‘I can or I will,’” read his nomination form. “The words, ‘I can’t’ are not in his vocabulary. He was the flag bearer for his class for the fun run.”