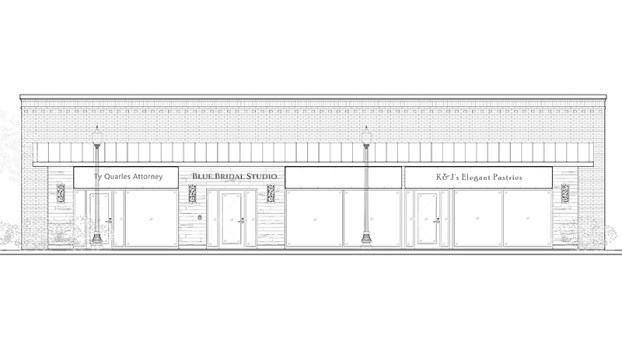 Several new businesses projected to open in 2017 are pictured in a rendering of what the area will look like once the work has been completed. (Contributed)

Renovations under way in portion of downtown Alabaster

ALABASTER – Several new businesses are projected to open in 2017 in a portion of historic downtown Alabaster thanks to a developer working to give the area a facelift.

“I have a passion for making old things new again,” said Ty Quarles, a developer who also serves on the Alabaster School Board. “There is an area in the oldest part of Alabaster that has been neglected. I thought it would be good to give it some new life by bringing new businesses to the area.”

Quarles is currently renovating three buildings in old downtown Alabaster along the south end of the Medical Mile district off U.S. 31 to be used as a bakery/pastry shop, bridal store, office space, brewery and restaurant.

“I started looking into this in December 2015 with the hope of providing some things for residents in Alabaster to have something to do after work,” Quarles said. “People work hard and they need somewhere to relax when they get off of work.”

The first businesses expected to open in February 2017 will be located in the former Gamble Furniture building at 236 First St. S., which will include K&J’s Elegant Pastries, office space and Blue Bridal Studio.

Quarles said a separate building, located across the street from the former Gamble Furniture building at 251 First St. S. will house The Copper Train Cafe, a meat and vegetable style restaurant.

“We are starting to renovate that space and we are completely revitalizing that whole building,” Quarles said. “We are going to put a new metal roof on it, and new doors.”

The third building, located next door to the former Gamble Furniture building, will be called Siluria Brewery, that will make and sell local beer.

“The idea for the brewery is to have something similar to what was done in Avondale at the Avondale Brewery,” Quarles said. “It is a really nice project. We are still in the design process for the brewery, but we hope to create a rooftop deck, and some other neat things.”

Currently, Quarles does not have a projected opening date for the brewery, but anticipates a possible opening of summer 2017.

Quarles said he has a background in construction and engineering, and enjoys looking at what something could become.

“I like looking at a piece of property or an area and trying to figure out what it could turn into,” Quarles said. “This particular area is the face of Alabaster. There has been so much done with the shopping center, but there is this historic part of Alabaster that could really use a good facelift. The proximity and location is really at the beginning of the Medical Mile and there is so much traffic that goes through that area on a daily basis.”

Quarles said city leaders have been supportive of his idea to renovate a portion of the city, after members of the Alabaster City Council voted earlier this year to accept the city’s “Alabaster Forward” comprehensive plan.

The plan was formulated through a city contract with the Regional Planning Commission of Greater Birmingham, and encourages the city to consider adding more zoning categories in the residential, mixed-use, commercial and industrial categories to encourage more types of development in the old Siluria mill community and Medical Mile district.

“I like to think of myself as not a developer, but an individual with a passion for making the old things new again,” Quarles said. “The council and mayor have been so great with this whole project. This is going to completely change the dynamics of the whole area.”

By BRIANA HARRIS / Staff Writer PELHAM – The Pelham community can now review proposed changes to the Pelham Board... read more