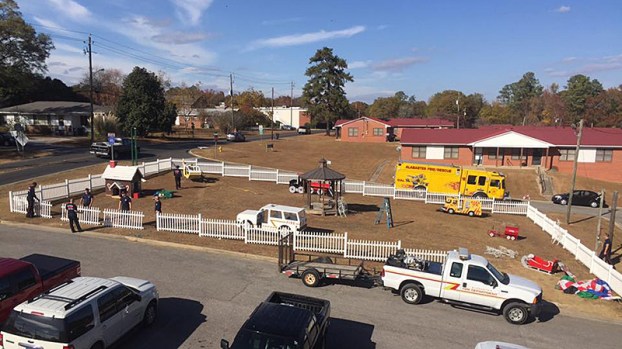 Firefighters from the Alabaster Fire Department met behind Fire Station No. 1 on First Avenue West in November to begin setting up the annual Christmas Village. The Village will open to the public Dec. 3 immediately following the Alabaster Christmas Parade. (Contributed)

ALABASTER – The Alabaster Fire Department is gearing up for the annual Christmas Village, which will open to the public Dec. 3 immediately following the Alabaster Christmas Parade.

The popular attraction that has been around for more than 25 years, features props for children including a replica of the city’s yellow and red fire trucks, a helicopter and gingerbread house, as well as a Chevrolet Tahoe command vehicle.

The Christmas Village is set up each year in a field behind Fire Station No. 1 on First Avenue West near the Albert L. Scott Public Library.

“This is something that we are excited about doing each year,” said Alabaster Fire Chief Jim Golden. “It lets us connect with members of the community, and it is also a nice way for families to have fun in a safe and secure environment.”

Golden said firefighters begin working on the village in November by setting up the props and making sure they are in good condition as well as adding Christmas lights and making any modifications from the previous year.

“I can’t say enough about our guys,” Golden said. “They do all of the work themselves. It is really neat watching it come together. This is something they do in their spare time, and it is really a great example of the commitment our firefighters have to the community.”

While Golden said it is difficult to estimate an exact number of people who attend each year, he suspects around 1,000 individuals show up to the free attraction during the holiday season.

“It is very well attended,” Golden said. “We always have fun with it, and we enjoy seeing people come from not just Alabaster but the surrounding cities.”

“We had a really great response from people sending their photos to us, and we would upload the photos from that previous day to our Facebook page,” Golden said. “We are doing that again this year, and invite anyone to submit their photos.”

Photos can be e-mailed to Santapics@alabasterfire.org. For more information visit the department’s Facebook page at Alabaster Fire Department.