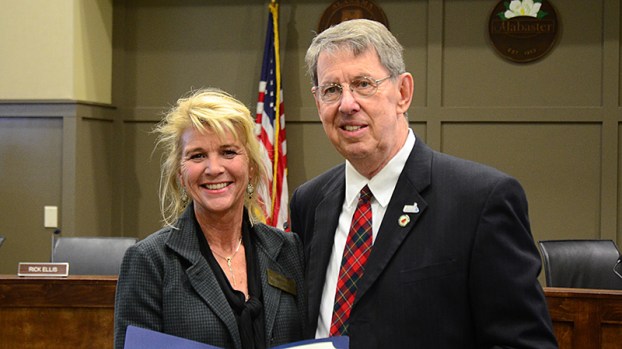 ALABASTER – Alabaster City Council members shined the spotlight on a longtime former Shelby County commissioner during its Nov. 28 meeting after he helped lay the groundwork for Alabaster’s growth over the years.

During the meeting, Alabaster Mayor Marty Handlon presented a proclamation honoring longtime former commissioner Daniel Acker for his contributions to the city and state, and surprised Acker with letter of recognition from U.S. Congressman Gary Palmer.

Many of Acker’s friends and family members filled the council chamber for the occasion, which came a few weeks after Acker, who did not run for re-election this year, served in his final commission meeting.

“During his tenure, commissioner Acker played an integral role in the advancement of our county through constructing major public facilities and infrastructure projects. His steadfast commitment to the improvement and enhancement of Shelby County will leave a lasting mark for generations to come,” Handlon said. “With the love and support of his wife, Judy, their four children and many cherished grandchildren, as well as his church family at Westwood Baptist Church, commissioner Acker has been an inspiration to his community, a humble public servant and a valued citizen.”

After graduating from college in 1959, Acker taught at Thompson High School and then the Shelby County Vocational School before serving on the Alabaster City Council beginning in 1972, where he helped to develop the city’s sewer system.

“I do hereby extend my gratitude to commissioner Acker as he retires from a lifetime of public service,” Handlon said. “May you delight in good health and happiness as you enjoy your retirement to the fullest.”

Acker praised the city’s leadership, and said he has proudly lived in the Siluria community for more than 50 years.

“I am proud of the way Alabaster has grown and their progressive leadership,” Acker said. “My feeling has always been to stay out of the way of city government and let them make their own decisions. If they needed me, they knew to call on me.”