SCT’s Dashing Through The Snow opens this month

A family feud, a wedding and a dose of Shakespeare will keep audiences of South City Theatre’s December production entertained and ready to embrace the Christmas spirit.

“Dashing Through The Snow” showcases a string of colorful characters who are guests at the Snowflake Inn in Tinsel, Texas, “where it’s Christmas 365 days a year.”

Three characters, Trina the innkeeper, Lou Ida the cook and a disgruntled guest named Boykin, knit the whole show together, Love said. But Lou Ida and Boykin never appear on stage; only their voices are heard.

Performing a voice-only part will be a new experience for Dianna Murphree, who will play Lou Ida.

“I have never done this before, but I think this is going to be so much fun,” Murphree said.

Sally Montgomery will play the role of Ennis, one of the feuding aunts.

Montgomery’s character, a textbook germophobe, carries a can of Lysol with her, compulsively cleaning anything she thinks is dirty.

Like Ennis, the other characters’ quirks surface throughout the show.

Montgomery moved to Birmingham in 2001, and the second play she performed in was a Christmas show at SCT.

“I was a Jolly Jingler,” she said. “That kind of got me started. Every play, I learn something. I just enjoy performing.”

“Dashing Through the Snow” marks actor Chris Glasgow’s third play with SCT. Glasgow will play the part of Hoyt, the feuding aunts’ nephew whose failed attempts at peacemaking lead to laughter.

“Dashing Through the Snow” is Love’s first production as director.

A longtime patron of SCT and community theatre participant, Love performed in her first show with SCT, “Design for Murder,” in October.

“I’m very excited,” Love said of “Dashing Through The Snow.” “It’s really a unique way to do things, and it’s funny as all get out.” 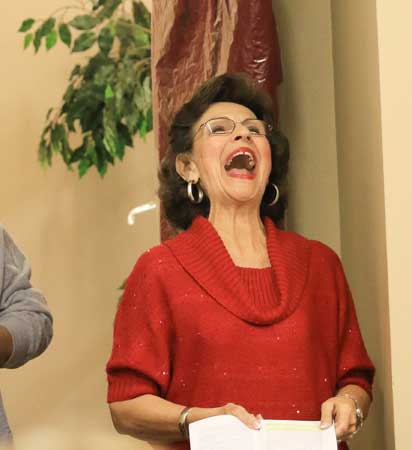 Tickets are $16 for general admission and $13 for students and seniors.

“It will get you in a holiday mood,” Love said. “Come for a good time.”