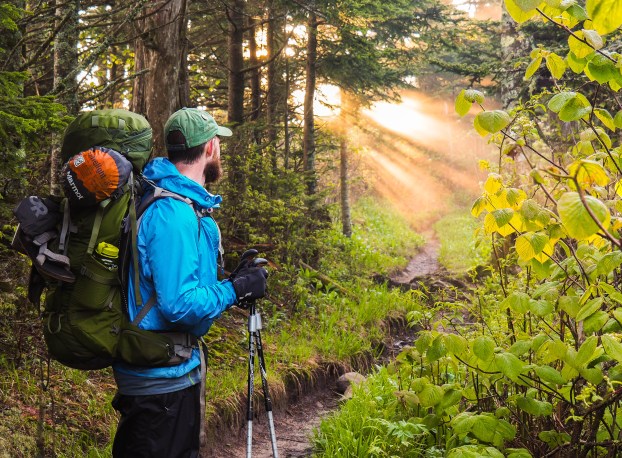 Helena native Davis Grimes and his father, Tom, started talking about hiking the Appalachian Trail together years ago.

When Davis was a child, he joined Boy Scouts and delved into camping, backpacking and other outdoor activities he and Tom enjoyed.

A map of the Appalachian Trail on the wall of Dr. William Whitaker’s office further piqued Davis’s interest, and, in Tom’s words, “planted a seed” in his mind about someday attempting the arduous, 2,190-mile expedition on foot.

“I’ve always wanted to hike it since I was a kid,” Tom said of the Trail, also known as the “A.T.”

Originally, the two aimed to complete the entire trail in one trip – a thru-hike – after Davis graduated from college.

But cancer changed their plans.

Tom, who works for the Shelby County Highway Department, had been diagnosed when he was 28 years old with Hodgkin’s lymphoma, a cancer of the lymphatic system that compromises the body’s ability to fight infection.

The treatment of the disease caused him to develop radiation-induced sarcoma in the spring of Davis’s freshman year of college, nearly three years ago.

While Tom’s dreams of a thru-hike evaporated, Davis’s determination to conquer the challenge only solidified.

On May 4, Davis started his thru-hike at Springer Mountain, Georgia, the A.T.’s southern terminus.

Tom hiked with him for roughly 12 miles before sending Davis on his way.

“It was tough,” Tom said. “I can’t imagine what he went through, just from the short amount of time I was on the Trail. It’s more of an endurance test than a hike.”

And Davis couldn’t imagine what he would go through, either, until he was in the thick of the Trail’s wilderness.

“I didn’t physically prepare for the trip at all beforehand, so the first couple of weeks on the Trail were rough,” he said, noting he endured shin splints twice in the first month, plus rolling ankles and the normal “wear and tear” the physically demanding journey delivers.

Davis started the trip with a group of about eight people, a “small trail family,” for the first two or three weeks. He assumed the Trail name “Highlander,” which is also in the name of his blog, Highlander’s Travels.

“I really enjoyed it for the first month or so,” he said. “After 500 miles is where I started to struggle mentally.”

He met a hiker from Tennessee named Andrew Forgione, whom he called “Blue” on the Trail, in the Smoky Mountains. The two men ended up hiking between 1,800 and 1,900 miles together.

“Most people end up finding other individuals to hike with,” Davis said, adding he and Blue still talk to each other. “It was also his first thru-hike and his first hike in general.”

Davis and Blue became hiking partners and stuck together through trying circumstances.

Davis suffered two sprained ankles and a bout of giardia, intestinal parasites that caused symptoms severe enough to necessitate a visit to a nearby hospital for treatment, followed by a day of rest in a hotel room.

While on the Trail, Davis carried the bare minimum in his backpack: a change of socks and underwear, a rain jacket, some camera gear, a sleeping bag and small amounts of food (mostly salami wraps with cheese and mayonnaise, Clif energy bars, Snickers candy bars and cold oatmeal in Ziploc bags).

“I almost never carried more than a liter of water at a time,” he said, adding he slackpacked at times, too. “Slackpacking is where you only carry food and water for the day. There are people who will carry your gear ahead of you … or drop you off at one trailhead and pick you up from another. It just gives you a break from having to carry absolutely everything. Then, you can really run.”

Davis and Blue set their sights on reaching the end of the A.T. – Mount Katahdin, Maine, the Trail’s northern terminus – as quickly as they could, so they adopted a brisk pace, averaging about 18 miles a day and sometimes logging more than 30 or 40 miles. 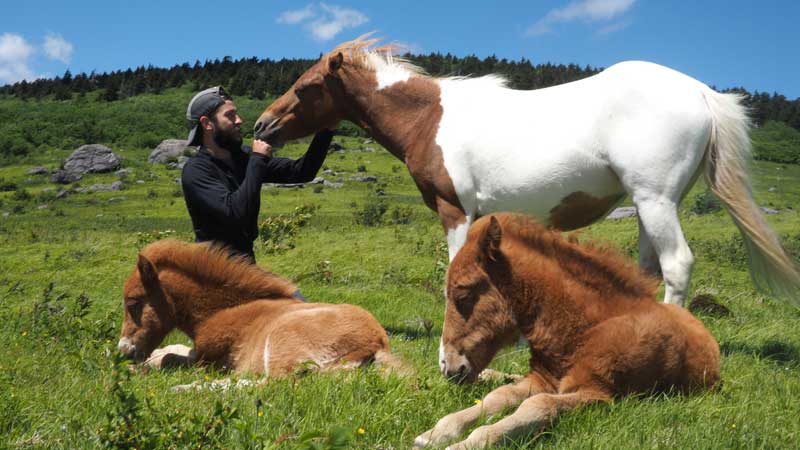 Davis and Blue both wanted to be finished and back home for different reasons by early October.

“We decided to be done by Oct. 1,” Davis said. “Then, we pushed it back to Sept. 4. I crossed the halfway point at two months and a few days.”

They finished on Sept. 12, eight days past four months total.

For most people, an A.T. thru-hike typically takes six months or longer.

“I can’t keep his pace,” Tom said, laughing. “He hiked fast in Scouts.”

Tom linked up with Davis a couple of times along the Trail, once in North Carolina and again in Virginia.

“We texted constantly,” Tom said, noting he and his wife, Amy, kept track of Davis’s progress on a virtual trail map online. “It gave me something to look forward to when chemo was bad.”

Throughout his intrepid trek across the A.T. terrain, Davis took numerous photographs and videos of the scenery, and blogged periodically from the Trail.

Among his favorite places were southern Virginia, with his rolling hills and farmland, and the White Mountains and Mahoosucs in New Hampshire and Maine.

Davis said he didn’t have any frightening encounters with bears, but did spot a nearly 500-pound bear in Pennsylvania.

The end of the Trail – and the conclusion of his journey – was bittersweet and surreal for Davis, who had never met the people aside from Blue with whom he summited Katahdin.

“It was really, really cold,” he said of the 32-degree temperature at the top of the mountain. “It was really emotional for numerous reasons. You get to the top and everybody’s cheering, and you get to the bottom and there is a crowd cheering. Everybody’s very supportive.”

Though Tom and Amy couldn’t make the long trip to Maine, they cheered for their son over the phone and welcomed him back to Alabama with thankful hearts.

“We were very happy to have him home in one piece,” Tom said. “It’s taken about two months for him to settle down. He’s eating somewhat normally again.”

One of Davis’s top priorities upon his return was sleep.

“I was just ready to go to bed,” he said. “My first week back, I couldn’t sleep much. I spent time walking in the mornings and at night. I still haven’t gotten back to regular sleep schedule.”

One of Davis’s shuttle drivers said two attributes of a thru-hiker are adaptability and patience.

“It was just a growing experience, I think,” he said. “I had to figure out what kind of hiker I wanted to be.”

And Tom figured out what kind of son Davis was, describing the journey as “one of the most meaningful things he could do to show he loves and cares about me.”

“I still want to go do it myself, but knowing he’s done it takes the pressure off,” Tom said.

Tom was set to finish chemotherapy in November and have another surgery in December.

“I don’t think I’ve ever been more proud of Davis,” Amy wrote in a social media post after Davis had summited Katahdin. “He took his father’s dream of hiking the Appalachian Trail and he fulfilled that dream for him.”

Davis has a degree in music technology and piano performance from the University of Alabama at Birmingham.

He has two sisters, Charlie Anne and Mary Katherine, and a brother, Wilson.

His current plans are to work, save money and continue hiking.

He might even hike the Pacific Crest Trail someday.

For now, reflecting on what he lost, what he found, who he met and who he became on the Appalachian Trail is enough.

“I always knew that this journey was going to be a difficult undertaking,” Davis wrote in a blog post several days after finishing the Trail. “It has the potential to be the most painful achievement I will ever face. There were days that I woke up and didn’t want to hike and all I could think about was quitting and coming home, but through the grace of God I finished.

“While this journey is over, Highlander is not done traveling. I know that the mountains will call be again soon so stay tuned for more adventure.”

Voices of the South

A cappella chorus gearing up for Christmas show at Lyric Theatre Written by Emily Sparacino Contributed photo If the walls... read more