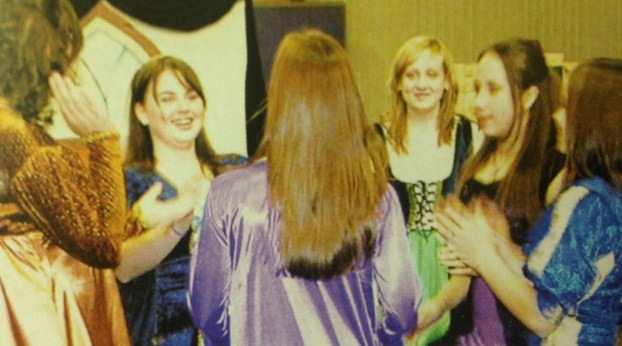 Students perform a traditional medieval dance during the 2007 Medieval Festival. This will be the first time in five years that CCS has resumed holding the festival annually. (Contributed)

High school students at Cornerstone Christian School will have the opportunity to immerse themselves in medieval European culture from noon to 3 p.m. on Dec. 13 at the Cornerstone Christian School Medieval Festival. All CCS students in the ninth through twelfth grades will emulate a day in the lives of people in the Middle Ages to gain a better understanding of the time period.

“This is a three hour attempt to immerge [the students] in what we’ve been learning in class, whether it be English or History, about the Medieval time period,” Cornerstone Christian School history teacher Laurie Porter said.

“It’s my first year back. All of the kids who are participating in it this year are too young to have done it before. This is new for everybody,” Porter said. “The middle ages had always been a fascination of mine.”

During the festival, students will dress in period costumes, emulate medieval etiquette and eat a meal that is similar to those eaten during the medieval period.

“To the best of my ability, in modern times, we’re going to reproduce the recipes and the foods from back then. It’s a three-course meal,” Porter said. “I had to learn what [the students] could eat and still gain the experience from. These aren’t flavors they’re used to mixing together.”

This year’s sophomore class will demonstrate one traditional medieval dance and teach another to all participants.

The junior class is responsible for organizing and teaching several games that were popular during medieval times.

The senior class will perform the play “St. George and the Dragon.”

To conclude the festival, ninth graders will demonstrate the medieval art “mummery,” or silent acting. A student will sing “We Three Kings,” and other students will act out the Biblical Nativity story.

In past years, each Medieval Festival has had a Christmas theme. This year’s theme is “Return of the King,” in honor of the school’s first Medieval Festival in years. Porter said this festival’s premise is a celebration for the return of a king who has been away crusading.

While Porter has organized the festival in advance, she said students will do most of the work during the event.

“This is completely student led. I will not stand up and do anything until it’s time to clean up. Once the program gets rolling, it’s all on them,” Porter said.

Porter said the Medieval Festival is an experience that is exclusive to students at Cornerstone Christian School.

“You can talk about this stuff all day long. They can take notes and they can take a test, but this makes history come alive,” Porter said. “When kids who are adults now come back, this is one of the things they talk about. It is a unique experience that they’re not going to get anywhere else.”

By BRIANA HARRIS / Staff Writer PELHAM – The Pelham community can now review proposed changes to the Pelham Board... read more