Whitney Culpepper realized she wanted to be a pharmacist when she was in the sixth grade.

Culpepper, 28, and her parents frequented a small, family-owned pharmacy called C & H Discount Drugs in Fort Payne, her hometown. As she watched the workers busily filling prescriptions behind the pharmacy’s tall counter, Culpepper knew she wanted to be on the other side of the counter, too. 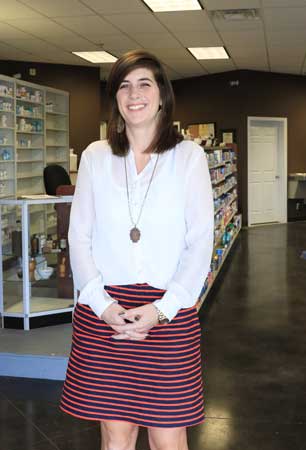 “Every person that came in, they knew them all by name,” Culpepper said. “It was just more of a family atmosphere rather than a business.”

The pharmacy is also the standard by which Culpepper has established her pharmacy, Hoover Hometown Pharmacy.

She worked part-time as a cashier at the pharmacy during her junior year in high school and eventually became a technician. After she enrolled at Samford University in Birmingham, Culpepper returned to Fort Payne each summer to work at the pharmacy, where she learned as much about helping people as she did about medicines.

Culpepper graduated from Samford’s pharmacy school in 2012 and moved to Washington, D.C., to complete her residency.

When she thought about where she wanted to start a business, Birmingham was an automatic choice.

“I knew I wanted to be in Birmingham,” Culpepper said. “Birmingham, to me, offers a lot but still has a feel of a smaller place … more of a community.”

She and her husband, Ben, who is also a pharmacist, married in May. Hoover caught Culpepper’s eye as she scouted for a spot to set up shop.

“We love Hoover itself,” Whitney said. “This seemed to be the area that needed an independent (pharmacy).”

Whitney’s attempt at building relationships instead of just running a business has been met with a positive response from the community, she said.

“I feel like it’s been really good getting plugged in,” she said. “All of the other businesses on this strip – I can’t say enough good things about them.”

Services rendered at Hoover Hometown Pharmacy include prescriptions, immunizations (including pneumonia, flu and TDAP) and medication synchronization. Blood pressure and blood glucose checks can be done too.

“We can give vaccines and counsel patients,” Whitney added. “That’s really neat.”

Eventually, she wants to offer free education classes on topics like diabetes and smoking cessation.

She is also giving back to the community. If patients bring their church bulletin from Sunday to the pharmacy on Monday, Whitney gives 10 percent of what they purchase back to their church.

“I saw a pharmacy that did it in another state, and I wanted to find a way to invest in local churches,” she said. “That was a small step to do that.”

Along with walk-in and drive-through accessibility, the pharmacy provides free local delivery to the 35226 zip code.

Another layer of the business is its gift section, where items – picture frames, signs, clothing, coffee and more – come from local vendors.

“I love going into places where they have local items,” Whitney said, noting she plans to expand her selection of gifts to meet Christmas shoppers’ needs. “(I hope) to be a destination for that stuff as well.”

She said her goal is to combine efficiency with a high level of customer care.

“When you meet patients, they immediately become like your friends,” she said. “Everyone is very supportive.”

Sweets of the season

Chef shares dessert recipes for Christmas ’Tis the season for indulging in desserts. Anyone whose sweet tooth demands the perfect... read more