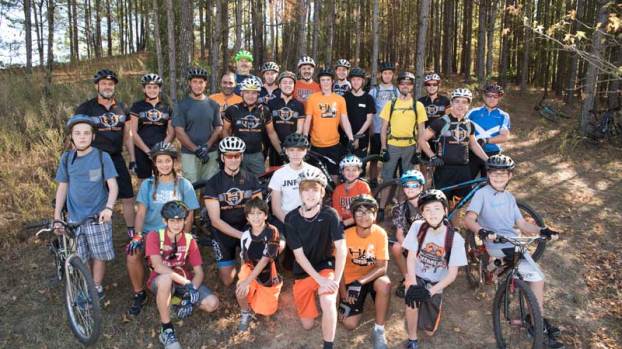 The Hoover Bucs Mountain Bike Team is rolling into a new season and inviting more local families to join the ride.

Since forming a couple of years ago, the team has worked to gain more attention from the community as an outlet for middle and high school students to hone lifelong skills in mountain biking and to embody core principles on which the team and its state and national governing bodies were formed.

“This is our third season,” Amara said. “It’s exciting how it’s growing and growing. Things are definitely moving in the right direction.”

The Hoover Bucs Mountain Bike Team is open to any middle or high school student enrolled in Hoover City Schools or homeschooled in Hoover.

Nearly 15 students comprised the team in its inaugural season.

But Amara, Frames and parent volunteers hope the number continues to grow.

Heidi and Jeff Hyde are among the parent volunteers who serve as ride leaders at team practices.

They have applied to be coaches this year.

“We have dabbled in mountain biking for 10 years or so,” Jeff said. “They developed this team a couple years ago. Our daughter was interested in it.”

Heidi stressed the team’s focus on inclusivity, noting every team member is given the same opportunities to participate in rides and races.

“There’s nobody sitting on a bench,” she said. “Everybody can participate. I think it’s a neat organization to be a part of.”

Along with inclusivity, other core principles emphasized in the league are equality and a strong mind, body and character.

Camaraderie among team members is a significant part of the personal development aspect of the group.

In its second year, the Alabama High School Mountain Bike League reported more than 300 racers and 23 teams from across the state competing.

The team’s activities center on preparing for and racing solely at cross-country mountain biking events.

“We’re trying to promote it and get people involved,” Jeff said. “It’s about kid development. We want everybody to participate that wants to.”

Amara and Frames led an informational meeting Oct. 19 for veteran and potential team members at Bike Link in Hoover. More than 20 students and parents attended.

Official practices start Dec. 1. The team’s tentative practice schedule is Tuesdays and Thursdays at 5 p.m., with spin classes to be announced, and Sundays from 2:30-5 p.m. at various locations.

“It’s amazing to see that many kids on bikes,” Frames said. “It’s very exciting. This is not all about racing; it’s about getting kids on bikes and the fun of it.”

“There are all kinds of levels,” Amara said. “This is something you’re going to do for the rest of your life, basically. It’s a blast.”