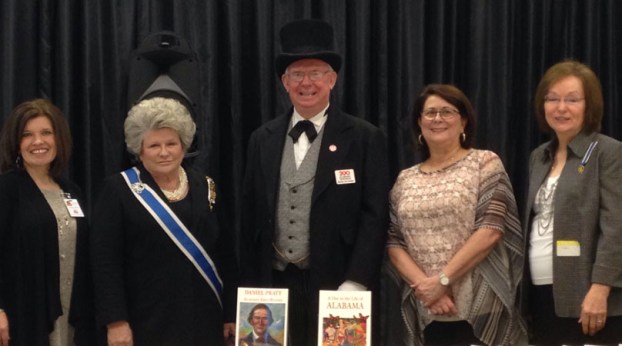 CPES students, faculty and the Alabama Bientennial Ambassador gathered to thank the Lily of the Cahaba chapter of the Daughters of the American Revolution for their contributions to CPES and FOES. (Reporter Photo/Amalia Kortright)

Fourth and fifth grade students at Chelsea Park Elementary School recognized the Lily of the Cahaba chapter of the Alabama Society Daughters of the American Revolution for their donations to the school at an assembly on Dec. 2 at 9:30 a.m.

The Daughters of the American Revolution (DAR) donated the entire collection of the “Alabama Roots” biography series to CPES and Forest Oaks Elementary School as part of the state of Alabama’s Bicentennial celebration.

“Would you believe that, in December 2019, he state of Alabama will be 200 years old? It isn’t everyday that a state celebrates its 200th birthday,” Seales said. “We’re celebrating not one, not two but three years beginning in 2017. During this time, there will be something offered to everyone.”

The books in the series chronicle the lives of 45 prominent figures in Alabama’s history. CPES Principal Jeanette Campisi-Snider said the “Alabama Roots” biography series will help students gain a new perspective of their state’s history.

“[The books] go along with our course of study in the state of Alabama for the fourth and fifth grades,” Campisi-Snider said.

According to Grund, the biography series will help to instill a sense of state pride in Alabama students.

“It’s inspirational to kids to see that somebody who may have lived down the street or in a nearby county could achieve so much,” Grund said. “It will inspire them to set their own goals and think of the possibilities of what they can do in their future. Sometimes we look at people who are famous and think that they’re way out there. To bring it home and to show the accomplishments of people from their own state is very important.”

Grund also said that the Lily of the Cahaba Chapter is one of the first Alabama DAR chapters to donate books to schools for the state’s Bicentennial.

“There are 71 chapters in the state, and we’re hoping that each chapter donates at least one set of books to local communities,” Grund said.

HOOVER – Students at Greystone Elementary School discovered how much fun learning can be during Brain Games. Brain Games,... read more