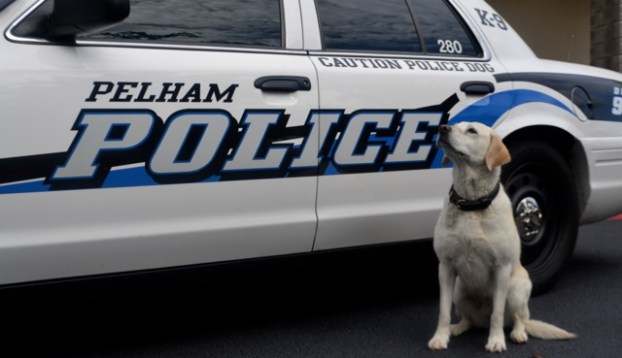 At the Pelham City Council’s Nov. 21 meeting, the city transferred ownership of the K-9 to her handler, Sgt. Steve Johnson. The police department now has two drug detection K-9s, with one possessing tracking capabilities.

The full-blood Labrador, who started her career with the Pelham Police Department at 1 year old, conducted 2,160 searches that resulted in 435 arrests and $1 million in asset forfeitures, said Police Chief Larry Palmer.

But Bizzy didn’t only assist the Pelham Police Department. In 2009, Palmer said the PPD was contacted by an interdiction team in Georgia concerning 1,200 pounds of marijuana seized during a traffic stop. The driver of the vehicle gave directions to a mini storage business where he picked up the load, but could only tell officers which row of mini storages, not the exact unit, where the drugs were located.

Bizzy searched the row of storage units and alerted on a unit.  A search warrant was obtained based on Bizzy’s alert, and inside the unit was marijuana and $100,000 in cash. This led to a second search warrant at the suspect’s house where more drugs and more than $100,000 in cash and other assets were recovered.

In 2011, the Drug Enforcement Administration utilized Bizzy on a search that resulted in the seizure of more than $300,000 in cash.

In April 2015, Bizzy performed her largest drug seizure to date. She was used in two different searches, one vehicle and one mini storage, that resulted in the seizure of 27 kilograms of cocaine.

But Bizzy wasn’t all work and no play. Palmer said she was an invaluable public relations asset to the city. She has been a popular feature at Youth Government Day in Pelham schools for several years, and has done numerous presentations at the schools.

“There’s not a kid who has gone through a Pelham school in the last nine years that doesn’t know Bizzy,” Johnson said.

Palmer said he hopes Bizzy will come back from time to time to make an appearance at special events.

“Bizzy definitely deserves a break and we wish her well,” Palmer said. “There’s an attachment between a handler and their K-9, and to be able to leave Bizzy with Sgt. Johnson after her career really pleases me.”

Johnson said that Bizzy has been a part of his family for years and there’s no way he could imagine giving her up.

“She’s not just a pet,” he said. “We’ve worked together and rode around in a car together for years. She’s a companion.”

Johnson said all of the department’s K-9s live with their handlers, but there’s a line that can’t be crossed.

“The dog goes where you go,” he said. “When she was still working there were boundaries, as far as playing with my kids and things like that, but now that she’s retired she’s completely spoiled rotten.”

Johnson said Bizzy might be replaced at some point, but for now the department will continue with its two remaining K-9s. Johnson said it costs $10,000 to $12,000 to purchase a K-9 and train its handler.

Group seeks donations for Christmas gifts for those with mental illness

By EMILY REED / Special to the Reporter ALABASTER – The Shelby County chapter of the National Alliance on Mental... read more