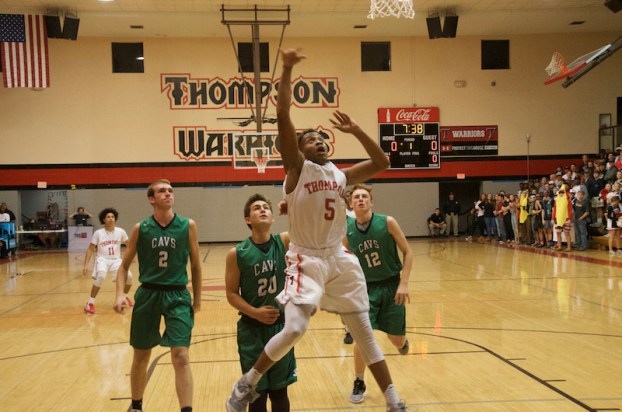 Thompson snapped a three game losing streak after they took down Oak Mountain in a big 7A non-area matchup on Friday, Dec. 2. (Reporter photo/Alec Etheredge)

Calera easily gets past Dora

After a couple of tough losses in the Sneak Pete’s Thanksgiving Classic at Vestavia Hills, Calera (2-3) bounced back in impressive fashion by taking down Dora High School 71-46 on Monday, Nov. 28. In both wins this season the Eagles have scored 70 plus points.

The Oak Mountain Eagles improved to 5-1 after defeating 5A Mortimer Jordan 49-32. The Eagles have jumped out to the good start thanks to the play on the defensive end. They have held teams to less than 40 points in four of their five wins on the season and are only giving up 32.7 points per game. Kris Hutchins led the Eagles with 15 points, three steals and four assists. Will Stephenson and Josh Pierce added 14 and 11 points for Oak Mountain, respectively.

Thompson (2-4) lost its third straight game after falling to 6A Hillcrest-Tuscaloosa 54-46 on Monday, Nov. 28. The Warriors have struggled on the offensive end of the floor so far this year with their best offensive performance being a 58 points against Oak Mountain. Cheatham has a young team that is still trying to figure out the coach’s new system, but the season is young.

Stephen Campbell has done all he can to try and will the Yellow Jackets to victory, but in three of their past four games it hasn’t been enough. Two of their last three have been decided by one point having lost to Ashville 40-39 and the Wildcats on Tuesday, Nov. 29 48-47. Campbell dropped 26 points and even got help with Chris Hardie adding 16, but it just wasn’t enough as Vincent lost another heartbreaker.

The Westminster boys’ basketball team picked up their second win of the season to move to 2-3 after downing Thorsby 66-58 on Tuesday, Nov. 29.

The Hornets improved to 5-3 on the season after taking down Briarwood (3-4) in a close low-scoring 46-39 game on Dec. 2. The win snapped a three game losing streak for the Hornets.

The Warriors (3-5) defense showed up on Friday night as it led them to a close 50-46 win over the Eagles (6-2). It marked Oak Mountain’s second loss of the year and snapped a three game losing streak for the Warriors.