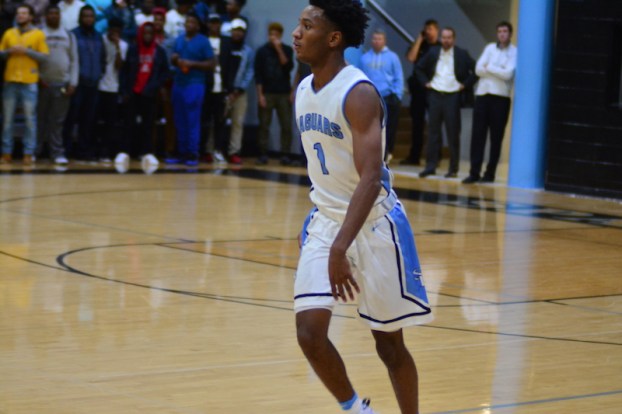 Spain Park fell to Pelham on Friday, Dec. 2, by a score of 64-60. The game featured two of the states’ top recruits in Jamal Johnson and Alex Reese. (File)

HOOVER ­– The Pelham Panthers (5-1) defeated Spain Park (5-3) 64-60 in a thriller Friday night, Dec. 2 at Pelham High School. They game went back and forth several times in the game and the Panthers held the Jaguars scoreless on their last possession to get the win. The matchup featured two of the top recruits in the state in Spain Park’s Jamal Johnson, Memphis commit, and Pelham’s Alex Reese, Alabama commit.

“Tonight was a great high school basketball game,” said Panthers head coach Joel Floyd. “The atmosphere was terrific. It was a back and forth battle all night. You had two division 1 players competing along with several talented underclassmen. We are thankful we made enough plays down the stretch to pull out the victory. This was just the type of learning experience we needed as a team.”

Pelham started the game hot on an 8-2 run, but two straight three pointers from Jamal Johnson pulled the Jags to an 8-8 tie. With 4:19 left in the quarter, Reese made a layup to give the Panthers a 10-8 lead, but yet again Spain Park answered and went on a 9-0 run. They took a 17-10 late in the first quarter before Justin Allison hit back-to-back threes to pull the Panthers within one point at 17-16. The quarter ended with the Jags scoring four unanswered points as they took a 20-16 lead into the second.

In a back-and-forth second quarter that saw several lead changes off of three-point shots, Pelham outscored the Jags 19-12 in the half as they took a 35-32 lead into the half.

Pelham came out and extended their lead to five early in the third quarter behind some big shots and a dunk from Reese before Spain Park went on a 16-11 run to take back a small lead.  The two teams battled tightly with neither gaining more than a three-point lead in the quarter. Johnson had nine points in the quarter to help the Jags tie the game at 50 as they headed to the final quarter of play.