PELHAM – Sunday, Dec. 4, marked seven years since Pelham Police Officer Philip Mahan Davis was shot and killed during a traffic stop Interstate 65, and every year since his death family, friends and law enforcement officers have gathered to honor and remember his legacy and sacrifice.

On the anniversary of his death, a wreath-laying ceremony was held at Davis’ gravesite at Southern Heritage Cemetery at 2 p.m.

“Each year we lay a wreath on his grave because we don’t want anyone to forget. We will never forget,” said Pelham Police Chief Larry. “We will continue to do this every year for as long as I’m around.”

Davis was Pelham’s first police officer to be killed in the line of duty. For Palmer, the anniversary of his death is a time to reflect on the kind of person Davis was.

“He was a great human being who loved his wife and two kids,” Palmer said. “He was a great police officer and a great friend. We still miss him. There will always be a void that can’t be filled.” 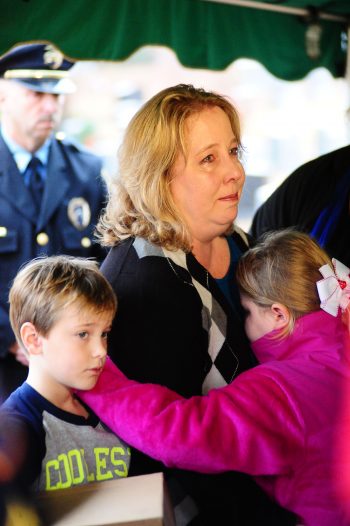 Amy Davis said the crowd at the wreath-laying ceremony doesn’t seem to wane from year to year.

“Even as an in-law I have felt an extreme amount of support from everybody,” Amy Davis said. “I don’t even know everybody here. There are rookie officers who never met Philip but they hear about this event and they come.

“Each year we get new faces. I’m in awe every year and it feels like we’re getting a warm embrace.”

A friend of the Davis family, the Rev. Mindy Acton, said she is amazed by the support Davis’ wife Paula continues to receive.

“He (Davis) was the first and hopefully to only Pelham officer to die in the line of duty, so it has very much impacted the department,” Acton said. “It means a lot that they’ve continued to support Paula. Right after the incident they were just remarkable and they never left her alone in the weeks following – the community also came together to support her. It means a lot to her. She has leaned on them in so many ways and they have just been so faithful.”

Palmer said one of the things he remembers most about Davis is his sense of humor.

“He had a dry sense of humor like I do and he and I just got along great,” Palmer said.

Shortly after Davis’ death, the city of Pelham renamed the street where the Pelham Police Department sits to Philip Davis Street and his wife, Paula, made it her mission to help the families of other law enforcement officers who die in the line of duty.

Acton, who also helps run the foundation, said the foundation has provided financial assistance for counseling, flown families in for funerals and sponsored safety training for first responders.

The foundation hosts the Philip Davis Memorial Golf Tournament each year in May to raise money to fund the foundation’s efforts.