It’s a sad time of year as the 2016 football season has officially come to an end. We saw a fantastic football season by all of the teams across the Shelby County area, including a chaotic last couple of weeks to the season that sent several different teams to the playoffs. After it was all said and done, for the second consecutive season, nine teams across the county from the AHSAA, AISA and ACSC levels participated in postseason play.

Now that all of the teams have wrapped up postseason play after Briarwood’s impressive run to the semifinals, it’s time we take a look at the All-County teams. With the return of several prestigious players in the county, there were several standouts that deserve recognition this year, some of which won’t make the list, but are still deserving. We have compiled first and second team offenses and defenses, as well as a list of honorable mentions. Let’s dive in.

Running Back: Zalon Reynolds, senior, Chelsea. 249 carries for 1,886 yards and 20 TDs. He averaged 171 yards per game, an incredible 7.46 yards per carry, and 1.8 TDs per game. Didn’t lose a fumble the entire year. Never got tackled on the first hit and broke 135 tackles on the year.

Running Back: Trezman Harris, Alex Dozier and Decorean Mickens, seniors, Calera. Okay, so the combination of running back’s at Calera was too great to pick one, and they were all deserving of first team honors. They combined for 281 carries, 2,165 yards and 33 TDs. That was good enough for an average of 180 yards and 2.75 TDs per game. 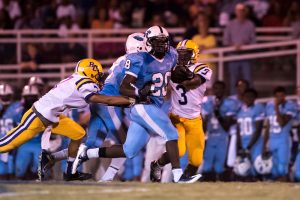 Offensive Line: Amari Kight, sophomore, Thompson. The 6-foot-6, 315-pound sophomore helped pave the way for the Warriors this season and is already getting Division 1 looks.

Offensive Line: Will Baumbach, senior, Briarwood. A first-year starter on the offensive line, played center, guard, tackle and on the defensive line.

Offensive Line: Dalton Purcell, senior, Shelby County. 21 pancakes on the season, helped create space for a team that runs the ball on 90 percent of its offensive plays.

Offensive Line: Mackenan Thompson, senior, Calera. Helped block for a team that ran for 3,000 plus yards and has several college looks. He was an All-State honorable mention as a junior.

Wide Receiver: Tre’Shawn Brown, senior, Montevallo. 72 receptions, 1,100 yards and 11 TDs. He averaged 15.3 yards per catch and almost a touchdown per game. By far the best receiver in the county and got very strong consideration for Player of the Year.

Wide Receiver: Yatil Gant, senior, Calera. 39 receptions, 736 yards and six TDs. His yards don’t jump off the page, but averaged 18.9 yards per catch and helped lead the Eagles to a second-round playoff appearance.

Linebacker: Jackson Hughes, senior, Montevallo. 126 tackles, 13 tackles for loss, two sacks, two interceptions and a fumble recovery. He made plays all over the field for the Bulldogs this year.

Linebacker: Tyler Olds, sophomore, Montevallo. 153 tackles, 22 tackles for loss, six sacks, three fumble recoveries and one interception. The leading tackler in the county and third in tackles for loss.

Linebacker: Nick Mobley and Jalen Rayam, Thompson. Both of these guys are very deserving of first team spots. Mobley, a senior, was third in the county with 141 tackles and tied for the lead with 23 tackles for loss. Rayam, a junior, had 125 tackles and 15 tackles for loss of his own.

Linebacker: Jon Drake, senior, Pelham. 131 tackles, eight tackles for loss and two sacks. Created an extra linebacker spot here because he is so deserving of this honor.

Defensive Back: Carson Donnelley, junior, Briarwood. 78 tackles, 10 pass break-ups and five interceptions. Just a junior, his five interceptions were second in the county. Will be a force in the secondary for the Lions next year. 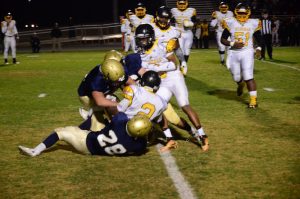 Running Back: JR Tran-Reno, sophomore, Briarwood. 155 carries for 984 yards and five TDs. Also caught the ball 19 times for 255 yards and three TD’s. As a sophomore averaged 88.5 yards per game and more impressively 7.1 yards per touch.

Offensive Line: Houston Needham, senior, Chelsea. The 5-foot-11, 235-pound senior was the coach on the field and another anchor to help Reynolds become Player of the Year. 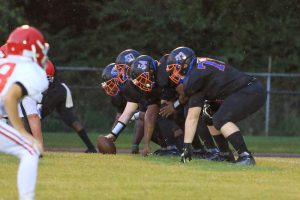 Offensive Line: Will Mullins, senior, Spain Park. A two-year starter on the offensive line, helped block for two of the better running backs in the county in Johnson and Wooden.

Offensive Line: Alan Brown, freshman, Pelham. Had 35 pancakes on the year and graded above 90 percent for the year. Deserved recognition for his outstanding play as a freshman.

Offensive Line: Jake Byers, senior, Evangel. A lot of guys could’ve taken this last spot, but Byers is just one of those guys that deserves recognition. He moved positions during the year to take over as the center and captain of the offensive line. Truly unselfish and what this sport is about.

Linebacker: Mark Hand, sophomore, Briarwood. 132 tackles. Yancey said he is the best athlete on the team as a sophomore.