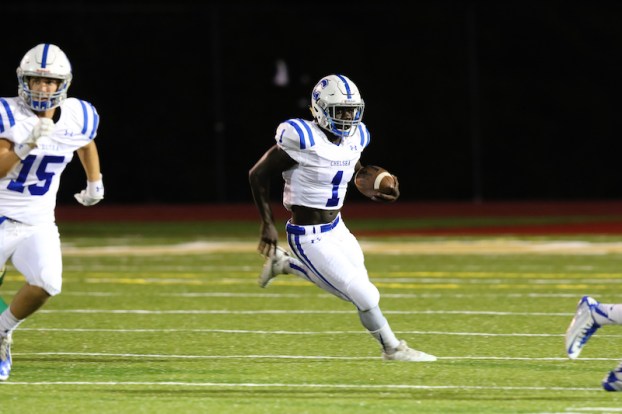 Chelsea’s Zalon Reynolds rushed for 1,886 yards on 249 carries, averaging 7.6 yards per touch in his senior year, and is the Player of the Year in Shelby County. (File)

CHELSEA – Now that the 2016 football season has drawn to a close, it’s time to pass out some postseason awards. With the end of each season comes a moment of reflection before public consciousness shifts gears completely onto what is happening next, and it is in that moment we find ourselves now. We have, as usual, picked a Player of the Year, a Coach of the Year as well as a First and Second All-County team from a wide list of deserving players, and a number of the nominations were tough to make considering the excess of talent that was on display this fall in the county. One of the toughest decisions to make this season surrounded who should be dubbed the overall Player of the Year in the county, and after much thought and consideration the nod went to Chelsea’s Zalon Reynolds.

Before diving into Reynolds’ accomplishments, acknowledgements need to be made for a few players, three in particular, who could have easily been nominated for this award. One was Reynolds’ backfield mate Matt Marquet, who finished the season with 2,522 yards and 33 touchdowns combined through the ground and air and provided Chelsea with the deadliest one-two backfield punch in the county. The other two, Zac Oden and Tre’Shawn Brown of Montevallo, led the Bulldogs to their first 10-win season since 1983 and put up prodigious numbers as well. Oden finished his senior season with 3,210 yards passing and 32 touchdowns while Brown hauled in 72 of Oden’s passes for 1,100 yards and 11 scores while also recording 108 tackles, including 14 for loss, on defense. Those three had remarkable years and are duly recognized in the All-County lists, but deserved a mention here as well.

Now, onto the matter and player at hand. Reynolds had one of the best senior seasons in recent memory in the county for a running back, helping power an offense that averaged 41.4 points per game for a Hornet team that finished with an 8-3 record. An incredibly powerful runner, the five-foot-seven-inch, 180-pound back consistently ran around and through defensive linemen and linebackers much larger than himself. He finished his senior year with 1,886 rushing yards on a whopping 249 carries, averaged 7.1 yards per carry on roughly 22 carries per game, scored 20 rushing touchdowns and didn’t lose a fumble all season. Also, he broke 135 tackles this year. 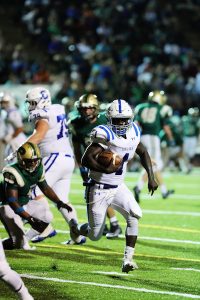 “The thing that sticks out to me is his 7.6 yards per carry at this level,” Chelsea head coach Chris Elmore said of his senior standout. “And that’s with 249 carries. Everybody that played us, you have to think that they came into the game saying, ‘How do we stop No. 1?’ Obviously, Matt’s a really good player, but I know everybody came into the game thinking, ‘If we stop No. 1, we’ve got a chance.’ And he still averaged 7.6 yards per touch.”

“He’s so talented,” Parker said of Reynolds. “He can do so much. He’s not just a speed guy, he’s not just a power guy. He’s one of those kind of guys that you look at and you go, ‘Okay, what are we going to do to stop this kid?’ You start trying to game plan, you start trying to scheme, but at the end of the day you realize it’s going to take a bunch of hands to get him on the ground.”

Helena broke into the 6A ranks this year for the first time and went up against the likes of Ramsay’s Baniko Harley and Opelika’s Weldrin Ford, who met in the 6A state finals on Dec. 2, as well as Benjamin Russell’s Necolby Maxwell and Wetumpka’s Kamryn Jackson, some of the top playmakers from across the state this year. Parker didn’t hesitate in saying Reynolds was every bit as good as those other backs.

“He was in the top three at least of guys we saw, if not the best,” Parker added. “He wasn’t their (Chelsea’s) only guy, but he was the guy who you knew every time the ball was in his hands, he could take it to the house in a heartbeat. You can’t really get him down with one man.”

Reynolds himself is a well-spoken, incredibly polite kid. Born in Talladega, he moved to the Chelsea area when he was in the fourth grade and has essentially been playing football with the same group ever since. A natural talent from a young age, Reynolds maintains he has never gotten caught up with how good of a player he is, instead he has always kept his focus centered on improvement.

“I’m not that type of person,” he said. “I’m the type of person who thinks, ‘What can I do better, where do I need to focus more attention?’ That’s the kind of person I am. I don’t really think, ‘Hey I’m good at this, we need to keep doing this,’ but I just try to think about how I can get better. That’s my train of thought.”

Also, at just 5-foot-7-inches and 180 pounds, Reynolds is a freak in the weight room. His squat max stands at 425 pounds and he benches 300 pounds as well. His most impressive attribute in the weight room, however, is his power clean, which stands at a ridiculous 285 pounds. Elmore makes note Reynolds was not just Chelsea’s pound-for-pound strongest player this year. He was the strongest on the team. Period.

“Even with our linemen that weigh 280 pounds or more, he’s stronger than them,” Elmore said. “That’s what people, especially college recruiters, overlook. They see him and think, ‘Well he’s 5’7, 180,’ they don’t realize how put together he is, how strong he is.”

Like Parker from Helena, Pelham head coach Tom Causey had similar things to say regarding Reynolds.

Causey, who was the head coach at Demopolis for eight seasons before taking the Pelham job, compared Reynolds to one of his running backs from his time with the Tigers. 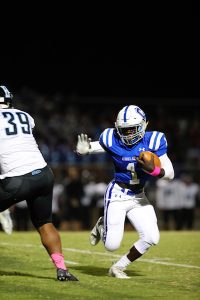 “He reminds me of DaMarcus James,” Causey said. “DaMarcus finished second in the running for Mr. Football in 2009. Zalon has better speed than DaMarcus had, and you just can’t coach the vision and balance he has.”

In Chelsea’s final game of the season, a heartbreaking 31-23 overtime loss to Bessemer City, Reynolds provided a performance that encapsulates his year and career much better than words could. Early in the first quarter, he went down with what appeared to be a severe high-ankle sprain, and it was originally unclear if he would return to the game at all. After limping off the field and getting his ankle re-taped however, he returned to action, though obviously affected. He finished that game with 227 yards rushing on 29 carries and a late 40-yard touchdown run that kept Chelsea’s hopes alive, essentially on one leg.

Reynolds ended his prep career with 3,847 yards rushing, the vast majority of which came in his junior and senior years, to go along with 35 touchdowns. He joins former county players like Shelby County’s Jamarius Mayfield and Calera’s ShaKeith Tyes as the latest in a line of incredibly productive and efficient backs, and as a result is the 2016 football Player of the Year.

By ALEC ETHEREDGE | Sports Editor NORTH SHELBY – One of the toughest things to do in this job is... read more