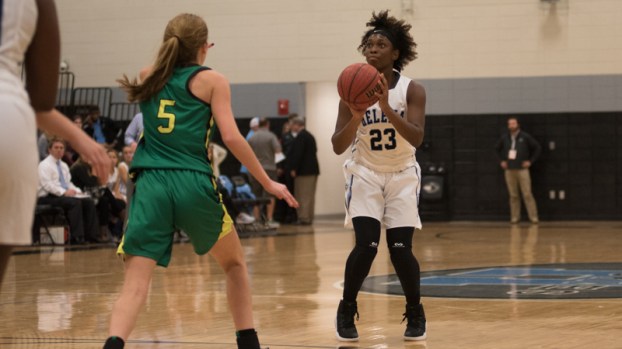 Helena’s Jordan Jones (23) lead the Lady Huskies in scoring in their road wins against Walker and Mountain Brook the week of Nov. 28. (File)

The Helena Lady Huskies girls basketball team got two big wins on the road in back-to-back days defeating Walker 49-28 on Dec. 1 and Mountain Brook 55-47 on Dec. 2.

The Lady Huskies had no problem taking care of Walker on the road on Dec. 1, to secure a 49-28 victory.

Helena jumped out to a 26-10 halftime lead and never looked back as the Lady Huskies were led by Jordan Jones who finished with 25 points in the game to lead all scorers.

“This was the second road game in three days for us,” Helena head coach Alan Skinner said. “We were able to work on some things in game situations and play a lot of people. I was proud of our focus and execution. This game being between Thompson and Mountain Brook, on the road, there was a chance for either a hangover from Thompson or looking ahead to Mountain Brook, but that wasn’t the case.”

The Lady Huskies had a chance to get revenge against the Lady Spartans on Dec. 2 in the team’s second matchup of the season after Mountain Brook defeated Helena 47-43 on Nov. 15, in the first matchup of the year.

The second time around would go in Helena’s favor as the Lady Huskies defeated Mountain Brook 55-47 to go 2-1 overall the week of Nov. 28 in three road games.

In the first half, the Lady Huskies were led by the hot outside shooting of Mary Elizabeth Laatsch, who drained four three-pointers to help give Helena a 25-16 first half lead. Laatsch finished with 14 points in the game.

Jordan Jones continues to be a scoring threat game in and game out for Helena as she finished with 17 points to lead the Lady Huskies and finish as the games leading scorer.

Helena head coach Alan Skinner was proud of his team’s play and competitiveness.

“I’m extremely proud of my girls for the way we played tonight,” Skinner said. “Before the game I talked to them, as I often do, about being competitors and having competitive character. I want them to compete and get after it whether they’re up 10 or down 10 and that showed tonight. We were up and down at different points in the game but kept fighting through it. Mary shot the ball well, Jordan did a good job of being aggressive and getting to the rim, Morgan was big tonight with 10 points. As a team we made good decisions with the ball and we’re starting to hit shots and finish at the rim. Jordan and Mekhi had big steals late in the game that took for layups to really seal the game for us.”

Lady Warriors use strong second half to defeat Helena