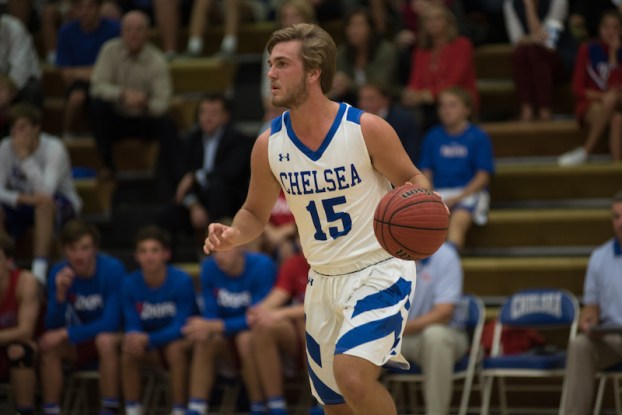 Chelsea had 11 guys score in their 67-30 win over Southside-Gadsden, as a team they shot 11-20 from behind the arc and 10-12 from the free throw line. (Reporter photo/Keith McCoy)

CHELSEA – Chelsea got back to its winning ways on Tuesday, Dec. 6 when it took down Southside-Gadsden 67-30. The Hornets started the season out 4-0 before dropping four of their next five games, three of which were by three points or less.

A home matchup with Southside-Gadsden seemed to be just what the doctor ordered. The first quarter went back-and-forth as neither team really established any kind of momentum, but Chelsea ended up edging the Panthers 14-11 in the quarter.

In the second quarter the Hornets were able to extend their lead to 27-17, but head coach Nick Baumbaugh felt like his team was leaving some points on the court and should have been up by more.

The adjustments made at halftime seemed to have lit a fire under the Hornets as they came out firing on all cylinders from shooting to defense. They outscored Southside 22-12 in the third quarter with six different players scoring. They acclimated to what the Panthers were giving them and all of a sudden found themselves ahead 49-29 as they headed to the fourth.

A lot of teams might let up and not play with as much intensity after gathering such a hefty margin, but that wasn’t on Chelsea’s agenda whatsoever. They came out in the fourth quarter and shut down the Panthers holding them to just one point off of a made free throw, while the Hornets piled on 18 additional points to end the game on a 30-13 run for the 67-30 win.

Joseph Lanzi continued his mark as one of the top contributors in the county with 16 points on the night to lead the Hornets, but this was much more of a team effort than they’ve had at any point this year as Colby Lambert came off the bench to add 12 points on four of five shooting from behind the arc, and in all, 11 Chelsea players scored on the night. The team might’ve had its best shooting performance of the year draining 11 of its 20 three pointers and going 10-12 from the free throw line.

Pelham wins 5th in a row

By ALEC ETHEREDGE | Sports Editor GARDENDALE – The Pelham Panthers continued their winning ways as they almost doubled up... read more